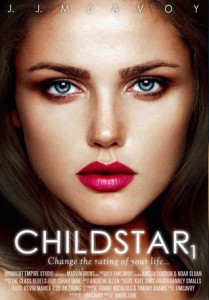 As the whole world watches, can they keep their secrets hidden? After all, everybody is a sinner…

***Read all three parts of J.J. McAvoy’s extraordinary new adult romantic suspense novel – CHILD STAR – and look for the full book, which will be released as an ebook and a paperback

LOUISA’S 4 STAR REVIEW
JJ. McAvoy has captured me again! She has given us 2 characters who are so alike yet so different and has put them together.
Noah – the quintessential hollywood bad boy!  He and Amelia grew up on screen together and behind the scenes were growing up too.  They seemed to have it all until Noah ends it all.  Amelia is heartbroken and not long after their very public and embaressing split, Amelia’s career begins to falter.  However, Noah’s life and career was going well but his fun has gotten a bit out of control!  He’s fresh out of rehab and is needing to re-energize his career. He is casted for the next book-made-movie, soon-to-be-blockbuster!  This job can be exactly what Noah needs to be back on top!
No one would every think that Amelia would or could be the co-star in Sinners Like Us.  She has the “good girl, naive” reputation and needs to get her career back on track and change everyones perception of her.  With her determination and hard work, she is casted as the leading lady.  But can she and Noah get past their past?
Noah can claim his bad boy ways, but I believe that deep down he is a good guy, just waiting to come out!

Even after all of these years, Amelia London was still my kryptonite, and she still didn’t know it.

Ms. McAvoy has created 2 characters I want and need to get to know better.  They are so great together and almost toxic at the same time. The sexual tension between these two was off the charts HOT!! I read this book in one sitting and can not wait for the next installment.
Another reason to love JJ McAvoy – there is minimal wait for the second installment!
KERRY’S 4 STAR REVIEW
They never truly had a childhood; they were always in the lights. The glamour of Hollywood where they were made stars, being told how to act, what to wear. But being a Childstar you know your time may run out.
Noah is America’s Bad Boy! He’s a heartthrob — his reputation speaks for itself what people don’t know is he is selfish, a liar and immature. When he is cast in the movie of a lifetime he knows he as to do it even when his co-star is someone he thought he would never see again.
Amelia’s career has been fizzling since being the child star —  she has a good girl image, she lives in the shadow of her mother.  However, when she’s casted in a blockbuster movie it will put her career back on top,  that’s if she can pull it off.  When she finds out Noah is her co-star,  she has no idea how do it, because he was everything: her first kiss, her first time, her first heartbreak.
The set takes place in Chicago…years after their bad break up. Noah and Amelia never thought in a million years this would happen, can they resolve there issues when they know both there careers depend on it?, The biggest problem,  it’s as soon as they arrive in Chicago they are hit with intense sexual chemistry neither one can deny
Childstar shows us how it  is to be a star, what fame has cost them. Noah and Amelia have hate/lust relationship, this book is a fast paced read that is full of intrigue. Their complex situation is what tabloids are made out of!
An ARC of Childstar was provided to Louisa & Kerry for an honest review
Child star Part 1 releases on October 27 – Preorder available HERE
Share