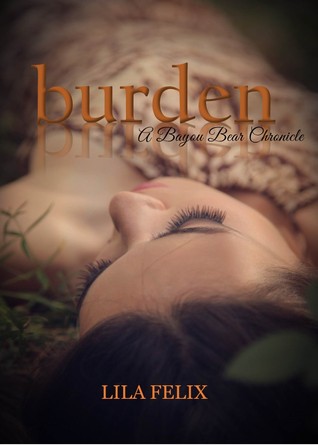 In the depths of the Louisiana swamps, clans of bear shifters roam freely. Hawke Turnclaw, the Alpha over all of his kind, is drowning in the legacy left to him by the Alpha before him, his own father. When he goes on a rescue mission to save a rogue Black bear from the clutches of a Grizzly clan, he finds more than just a Black bear, he finds his mate.

Echo has always been told she’s an anomaly, a fluke. She’s the only bear of her kind and that makes her a hindrance to her clan. She’s tried to run away, but they keep her tethered through guilt and a shock collar around her neck.

And then someone shows up claiming he’s her mate.
Now belonging to a new clan, will she ever be able to understand that she’s so much more than just a burden? 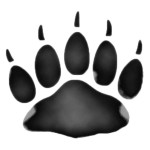 I’ve read a couple of Lila Felix’s Love & Skate series and loved them so when I heard she was branching out into a paranormal romance, I jumped right on it! Burden has a unique element of bear shifters as the paranormal element. I was completely on board since it’s a nice change of pace from the vampires, demons, angels, etc.

Lila’s writing style is smooth and draws me instantly into the story and into the characters’ lives. In Burden, we meet Hawke, a yummy, sexy alpha black bear shifter whose life it overwhelming to say the least. He’s taken over his clan from his father as well as being Alpha over all bear shifters and immediately discovers what a mess the leadership was left in. Echo is also a bear shifter that hasn’t really fit in with those who’ve raised her. I loved her strength and will. Lila knows how to write a strong female lead and Echo is no different. But there’s more than meets the eye with Echo and I was intrigued with learning more about her.

This is the story of Hawke and Echo, how they learn to build a relationship, strengthen the clan, and whether or not their bond can withstand outside forces that want to separate them. Overall, this was a fast, sweet, sexy read. I hope that with the next in the series, there’s further development of the bear clan world and more on the magical aspect. I would love to have more depth on the tensions between the clans and also even more history on Echo and her family history. Although there is a bit of fade-to-black on some scenes, there’s still an intensity and tons of sexual tension that Lila Felix excels at writing while creating full family and friendship relationships among her characters.