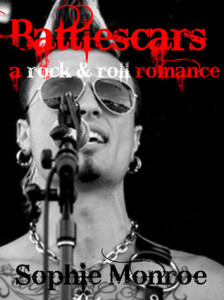 Meet Aubrey Thompson a 23 year old flight attendant. She works for her dad who owns a small fleet of commercial aircrafts. They usually fly middle aged businessmen. This flight she will be flying Jake Parker, the lead singer of Battlescars.

She’s strong willed, hilarious and says what most people would never. Jake is a typical rockstar, or so Aubrey thinks. Together they’ve met their match, in hell. In order to keep her dad’s company a float they will have to play nice…

Here’s a peek:
“Who are we flying this time? It better not be that creepy Carter guy again. I left him walking funny for a week last time.”
“No, he’s no longer a client here.” My dad said with a flinch. Carter Murphy was an arrogant ass. His dad owns Murphy Enterprises and he thinks he’s entitled to everything he wants, including women. He learned the lesson the hard way with me that you can’t always get what you want. We were flying from Houston to Dallas, a complete waste of fossil fuel if you ask me, when he decided he wanted to cop a feel. Boy was he surprised when I copped a feel of my own and twisted, hard. I still wish I had a Polaroid of his face. I would hang it as a warning to anyone else that wanted a try.

Oh wow! I loved Aubrey’s snarky, sassy, take-no-crap from anyone personality! Throw that together with Jake, a tatted-up, sexy rockstar who’s tired of the rock scene and just wants something and someone real in his life. Hmmm, serious fireworks going on between those two! Sophie writes some witty, snappy dialogue – whether it is spunky Granny Jean talking, Aubrey’s parents, one of Jake’s bandmates, Brett, Piper, or Jake and Aubrey. I laughed out loud several times!

What’s really wonderful about Battlescars is how Jake and Aubrey ‘get’ each other. They both come with scars and this is their story of how they each help the other overcome the pain that came with acquiring the scars and find new meanings. I enjoyed seeing their story unfold through both Aubrey’s and Jake’s eyes. Sophie handles the transitions really well on the dual POV. At the end, it seemed a little drawn out and not as smooth for me but I loved the end result! Even considering that it is bad boy rocker Jake and smart-comeback Aubrey that we’re talking about, this is a sweet, sweet story about two individuals becoming whole and left me feeling good.

I live in New Jersey and like to write between the chaos in my life.
Currently working on Battlescars:A Rock & Roll Romance.

You can find me on Facebook @ www.facebook.com/sophiemonroewrites
I love to hear from you guys!

Other places to find Sophie: