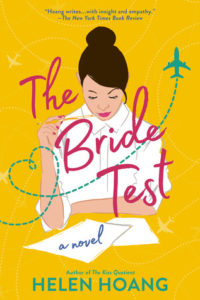 I read The Kiss Quotient and fell in love with Helen Hoang’s writing.  When The Bride Test landed on my kindle, I could not wait to dive in.

Esme Train is responsible for her grandmother, mother and little daughter.  A very heavy load for a young woman to bear.  Until one serendipitous day, when an offer too good to refuse lands in her lap.  All she has to do is go to America, meet Khai Diep, a handsome, wealthy, successful man and seduce him.  No big deal right?  Just get him to fall in love with me.

Khai Diep like his life the way it is.  He’s got a set routine and the last thing he needs is anyone coming into his house and turning everything upside down.  Irritation is about the only feeling he knows and understands.  Living with autism makes it impossible for him to feel either – or so he thinks.

True, Esme, sees this opportunity as a way to provide a good life for her family.  She also wants to find her American father who left Vietnam before he knew of her existence.  Cô Nga (Khai’s mother) is a very determined woman.  She has no doubt that Esme can connect to her son and will make a great daughter in law.  Khai wants Esme gone!  She wants to fix the garden and make him dinner and move all his things around.

Though autism is a common thread in both of Helen Hoang’s books, there is also humor, heat and a deep connection to family.  This is not just another cutesy romance.  These character are fully realized and felt like real people to me.  Esme struggles to make her way, far from her own home and despite her difficulty with the language.  She desires more for herself and her family.  Has she fallen in love with a man who may not be capable of returning her feeling?  Kai is having feelings.  Plenty of them but he’s told himself the same story so many times that he’s convinced it’s true.  He misses Esme when she’s not around.  Kai has to decide whether he can give her what she needs or let her go.

I loved The Bride Test so much!  Helen Hoang is shaking things up in the romance world and I can’t wait to read what else comes from her fresh perspective.  One last thing….read the Author’s Note.

The second book after The Kiss Quotient, The Bride Test was another great, original story from Helen Hoang.

Esme, a young mother in Vietnam, cleaning bathrooms and living in a one-room apartment with her daughter, mother and grandmother, the opportunity to go to America is something she can’t give up.  Given the opportunity to be with an American man – essentially set up for marriage by his mother.

Khai – a young successful man (not that you would know if from the outside), is smart, intelligent and autistic.  His mother wants him to fall in love and not be alone.  Khai, on the other hand, claims to be okay with being alone.

The writing is flawless, the connection between Khai and Esme wasn’t as defined at Stella and Michaels in the Kiss Quotient and was lacking a bit for me at times, I just wanted more between them. Khai at times was too robotic and I wanted more softness, I know being on the spectrum could often hinder his ability but we did see times of sweetness, I just wanted more of them.

In a split second, she redefined perfection for him. His standards aligned to her exact proportions and measurements. No one else would ever live up to her.

This can be read alone but I do believe that the Kiss Quotient was fantastic and can only lend to enjoying this book even further.

I love that the authors brings in her own culture and own life.  As a woman diagnosed with autism, she gives life to others with autism through her books. Giving Autism a new view, one we often don’t see.

Khai Diep has no feelings. Well, he feels irritation when people move his things or contentment when ledgers balance down to the penny, but not big, important emotions—like grief. And love. He thinks he’s defective. His family knows better—that his autism means he just processes emotions differently. When he steadfastly avoids relationships, his mother takes matters into her own hands and returns to Vietnam to find him the perfect bride.

As a mixed-race girl living in the slums of Ho Chi Minh City, Esme Tran has always felt out of place. When the opportunity arises to come to America and meet a potential husband, she can’t turn it down, thinking this could be the break her family needs. Seducing Khai, however, doesn’t go as planned. Esme’s lessons in love seem to be working…but only on herself. She’s hopelessly smitten with a man who’s convinced he can never return her affection.

With Esme’s time in the United States dwindling, Khai is forced to understand he’s been wrong all along. And there’s more than one way to love.