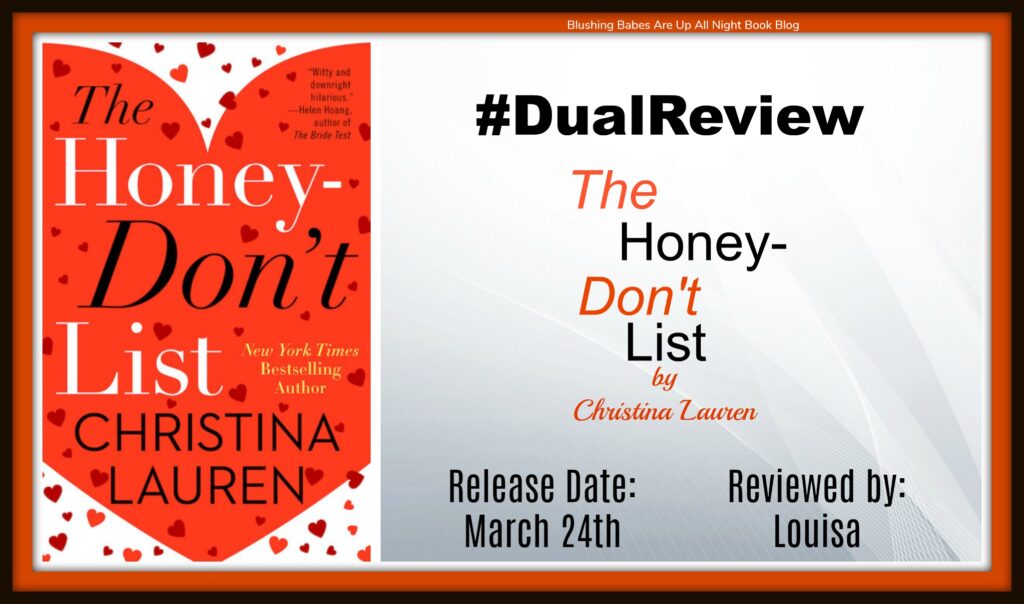 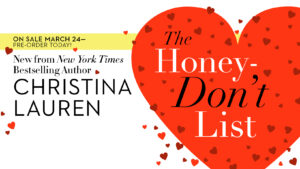 Carey and James are tasked with saving an empire…The Tripp empire – a husband and wife design due (think Chip and Joanna Gaines).

This husband and wife duo isn’t quite as happily married as everyone thinks and everything is about to go belly up.  This is not only a bad thing for Mel and Rusty but Carey and James too.

I have to be honest, this wasn’t my favorite Christina Lauren book.  I read it but wasn’t super invested in the characters, I didn’t connect with them as I have in the past.  Was it an enjoyable read?  Yes.  But I wasn’t pulled in like I usually am while reading Christina Lauren books.  I did get the laughs like I have learned to love in a Christina Lauren book, there was a definite SLOW burn happening here and the enemies to lovers trope is one of my favorites.  I just didn’t fall in love with the characters as much as I typically do.  It’s a fun, easy read and I am glad I read it, just was hoping for a bit more that’s all.

Carey is a trodden down assistant for Melissa and Rusty Tripp (which seem based on JoJo & Chip Gaines of Fixer Upper).  They’ve written a marriage self-help book and are going on tour promoting it.  Except the marriage is a sham and completely on the skids.

James has been brought with a lofty title but is in the same boat as Carey.  He’s left behind a scandal that has rubbed off on him so he has no choice but to stick it out.

As their success grows so does the pressure to maintain appearances.  It’s the beginning of how Carey and James end up being thrown together.  Though, for me, it took too long to get to that point.  Usually, I love a slow burn but this didn’t feel that way to me.  I didn’t feel invested in this couple – at all.  Too much Mel/Rusty and not enough Carey/James.

There were some funny moments and the story wrapped up in a pleasing way.  However, it was not what I have come to expect from Christina Lauren.  Having said that, I look forward to the next book from this dynamic duo as they’re past work has made them a favorite of mine.

Carey Douglas has worked for home remodeling and design gurus Melissa and Rusty Tripp for nearly a decade. A country girl at heart, Carey started in their first store at sixteen, and—more than anyone would suspect—has helped them build an empire. With a new show and a book about to launch, the Tripps are on the verge of superstardom. There’s only one problem: America’s favorite couple can’t stand each other.

James McCann, MIT graduate and engineering genius, was originally hired as a structural engineer, but the job isn’t all he thought it’d be. The last straw? Both he and Carey must go on book tour with the Tripps and keep the wheels from falling off the proverbial bus.

Unfortunately, neither of them is in any position to quit. Carey needs health insurance, and James has been promised the role of a lifetime if he can just keep the couple on track for a few more weeks. While road-tripping with the Tripps up the West Coast, Carey and James vow to work together to keep their bosses’ secrets hidden, and their own jobs secure. But if they stop playing along—and start playing for keeps—they may have the chance to build something beautiful together…

From the “hilariously zany and heartfelt” (Booklist) Christina Lauren comes a romantic comedy that proves if it’s broke, you might as well fix it.