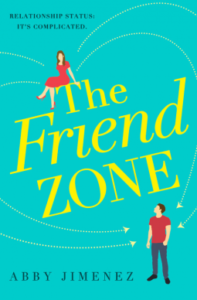 My blog partner brought this book to my attention and I am so glad I decided to read it too. It’s hard to believe that this is Abby Jimenez’s debut novel as it reads as a seasoned authors work!

The initial interaction between Kristen and Josh sucked me in and didn’t let go.  Their banter was great – their friendship, their genuine “like” of each other was fantastic.  As their friendship grew into more – they never lost the “friend” part, they were so great together, even though Kristen often wasn’t sure – but with Josh on the receiving end, he was fighting till the end to get Kristen.

This story gave me all the feels I am looking for in a book.  Some laughter, some steamy, some angst, and some tears.  This book has some serious themes to it that many can relate to and seeing the growth of these characters during these hard times is what made me fall in love with the characters and the story.  This is a bit of a slow burn, a friends-to-lovers romance that captured me early and it kept my attention without concern. I may have snuck a few pages in while at work at times because I was so invested in the story and these characters.

Absolutely take the time to read The Friends Zone soon because Abby Jimenez will have you laughing, crying and smiling while reading. A perfect debut and I am looking forward to more from this author in the future.

So a cupcake baker decides to write a romance that has nothing to do with baking?  It’s just going to be some silly chick lit that you’ll forget the day after you finish it.  Right?

You’d be so wrong!  Abby Jimenez starts by giving us a very non-traditional meet cute with a very sassy heroine and a good natured guy that doesn’t know what hit him at the end of their first conversation.  Boy rear ends girl’s truck and she jumps out wearing her morning coffee.

Kristen is sarcastic and funny.  John is a kind and attentive guy who is not moved at all by her bluster.  These two end up in each other’s lives and end up intertwined in more ways than they imagined.  Kristen is the maid of honor at her BFF’s wedding to Brandon.  Josh just happens to be Brandon’s BFF and best man.

A true friendship forms between them with each one tempted to make it more.  Kristen has a boyfriend who is coming home soon but she has so much fun with Josh.  Josh got burned in his previous relationship but he can’t stop thinking about Kristen.

You might thing that a wedding, meddling co-workers, a wicked mother, a boyfriend in the wings AND an adorable killer lapdog sound like a recipe for disaster.  Instead we get a great story that is full of humor, romance, heartache, plenty of angst and the perfect amount of steam.  The message of family and what that word means to these characters moved me to giggles and tears during the course of this book.  After reading the epilogue, author’s note and acknowledgment, I called my bestie and we had a 2 hour conversation about love and life in general.

I think the reader should just crack this book open without knowing too much.  Hence, why I’m being so general instead of giving you plot points.  I lived every single page of this book.  A debut this good makes me excited to read what comes next.  Unfortunately, we’ll have to wait until 2020 – something tells me the wait will be worth it.

Kristen Petersen doesn’t do drama, will fight to the death for her friends, and has no room in her life for guys who just don’t get her. She’s also keeping a big secret: facing a medically necessary procedure that will make it impossible for her to have children.

Planning her best friend’s wedding is bittersweet for Kristen — especially when she meets the best man, Josh Copeland. He’s funny, sexy, never offended by her mile-wide streak of sarcasm, and always one chicken enchilada ahead of her hangry. Even her dog, Stuntman Mike, adores him. The only catch: Josh wants a big family someday. Kristen knows he’d be better off with someone else, but as their attraction grows, it’s harder and harder to keep him at arm’s length.

The Friend Zone will have you laughing one moment and grabbing for tissues the next as it tackles the realities of infertility and loss with wit, heart, and a lot of sass.