Title: RAW: Rebirth
Series: RAW Family #3
Author: Belle Aurora
Genre: Romantic Suspense
Release Date: January 2, 2019
Blurb
It had been
six years since my world was turned upside down.
He exposed
me to the darker side of life and I could never go back to the person I was.
I had been
through more things the average person couldn’t even relate to.
If I had
the chance to go back and do things differently though?
Not a
chance.
I’d pick
him a thousand times. A million times. For eternity.
I guess not
much has changed.
My name is
Alexa Ballentine, and I am still in love with my stalker.

5 enormous blushes
I’ve waited and waited and hoped it would be soon. I’ve wanted to read this book like you wouldn’t believe. Belle Aurora delivers in this epic tale of childhood friends to a fairytale of a king and queen.

More, that’s what I wanted years ago when I finished RAW.
Overwhelmed with emotion, it was the 5 year book hangover.
Sexy in a way only Twitch can be.
Tumultuous was the reunion of Lexi and Twitch
Angry that it wasn’t easy for the couple.
Nice and easy was never what Twitch and Lexi were about.
Time, 6 years apart and their love was still there.
Incapable of being anything but Twitch, he was unapologetic.
Criminal empires were torn between love and war.
Inhumane, is how I would describe Ling Ling, or insane.
Pav was a surprising new side character, that I really enjoyed.
Awesome, is the feeling I had in the end.
Thankful that Raw wasn’t the end, and that we got more.
Endings like this one leave me feeling rewarded.
Devoted Belle Aurora reader.
“She was my bible. The pages. The Ink. The prayers. And I would revere her till the day I died, took my place, and waited for her on the other side.”

I, like many others, have been anxiously waiting…for YEARS…the continuation of the life and love of Lexi & Twitch.  We know from Raw (RAW Family, #1) that their story is not a conventional, hearts and flowers kind of story.  It was compelling and sexy and dark and amazing and Belle Aurora had my heart in her hands from Page 1.

I could continue to wax poetic about Raw but this is a review of Raw Rebirth so OK!  Moving on!

As soon as Belle posted on her IG that she was writing Rebirth the book peeps went crazy.  Me included.  I can’t even explain the excitement that ran through my body when I saw it on my Kindle.  It has been 6 years since Twitch died.  Lexie has had six years of tears, hurt and reliving the memories of how her stalker became her savior and the love of her life.  What happens when that familiar figure shows up in her bedroom?  Angel he says.  He said Angel and I was all in.  It wasn’t that easy for Lexi.  He had lots of explaining to do.  His old life – the people in that world – is he done with them?   Where has he been?  Lexi is no longer the same person.  She’s got a lot more to lose now.  Her son, Twitch’s son – his safety is her priority.  Time, heartbreak and motherhood have turned her into a badass.  Twitch has also evolved because he now knows and understands love.  He’s still controlling, don’t get me wrong, just a kinder and gentler kind of controlling.

Twitch stepping out of the shadows sets a chain of events in progress that could have disastrous consequences for all the people he loves.  How everyone traverses all of it and the fallout is the heart of RAW: Rebirth.  It was interesting to get the POV of the side characters so that we have an understanding of their motivations. As much as I wanted to binge read Raw Rebirth in one sitting – I also wanted to savor each and every word.

Can we talk about Lin for a second?  Her father may have planted that bad seed but everyone after him nurtured it because it suited their purposes.  Effectively turning her into a monster that no one could control.  No one should be shocked when she “bites”.

Was Raw Rebirth worth the wait?  Abso-freaking-lutely!  What a great way to bring this story full circle.  Belle Aurora gave us everything we wanted.  It was exciting, dark, sexy, heartbreaking, funny and gave us a few surprises along the way.  I cried for these characters!  The anti-hero that is Twitch – without equal.  My book nerd heart was so full when I was done that I immediately went back and the read the last three chapters again.  Why?  I wasn’t ready to say goodbye.

Thank you Belle Aurora for giving Lexi and Twitch the ending they deserved.  What a ride!  It was everything. 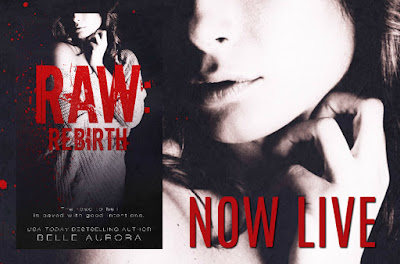 Available at other retailers soon 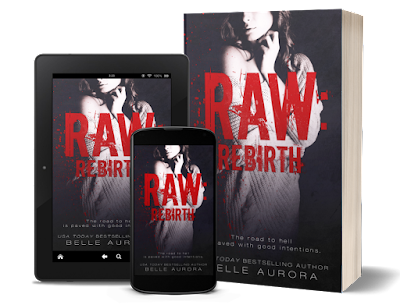 Belle
Aurora is a thirty-something year old and was born in the land down under.
At an early age she fell in love with reading. Boredom one summer had her
scouring the bookshelves at home. She stumbled across Sandra Brown’s Breath of
Scandal and fell in love with romance.
Having been brought up in a loud and boisterous family of Croatian descent, she
developed a natural love for dramatics and laughter. Only some years ago had
she discovered a new love.
Humorous romance novels.
So many authors had opened a brand new world where she could lose herself yet
feel safe and at home in their stories. Belle has been known to become a
screeching banshee while anxiously awaiting their newest titles.
Belle never thought she would write. It had never interested her until
recently. Friend-Zoned began to form and in February this year Belle typed the
words Chapter One. And she fell in love.
With words.
With writing.
With a creative imagination she never knew she harbored.