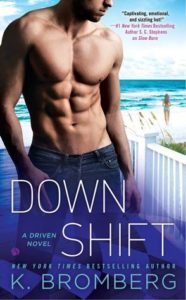 by K. Bromberg
The New York Times bestselling Driven series continues with a standalone story about finding love where you least expect it…

Behind the wheel, racing champion Zander Donavan is at the top of his game. But after too much excess in his personal life, he’s forced to step away. He needs to accomplish something all on his own—outside of his famous father’s shadow.Getty Caster is running away from the abuse that clouds her past. She thinks she’s found the perfect escape—until she discovers a stranger in the beachside cottage she’d been promised. He’s undeniably sexy, but she’s there to heal. Alone.

Before long though, fighting with each other turns into fighting their attraction. And giving into desire sets off a chain reaction that has their pasts colliding. With an unexpected love on the line, can they overcome the fallout to build a future?

If you think Zander pulled your heartstrings as a child wait to see what he’s gonna do to you as an adult. This is a beautiful story of a broken adult who’s given a second chance. What a way to end this series! I was so emotional after reading Zander and Getty . Their wasn’t one moment that my heart wasn’t in my throat while reading. Honestly, we see Zander for who he really – is a broken boy that’s now a  man – who holds his past in the present and that won’t allow him to move forward.

Getty has been  abused emotional and physically.  She believes she’s damaged and is running from her past. She wants to find herself, live in the moment and finally –  not by rules. I felt a strong connection to her Getty. Getty has her guard up all the time,  she’s afraid to let go and feel.  Zander and Getty both find themselves living in solitude when what they both need is to learn to let there demons go. They both find what’s important to them. They both find the courage to live there lives. They both find friendship when neither one thought they needed one. At the start they both are hesitant to follow their hearts but as they continue their lives forever are changed.   I have to say, the banter between them brings light into this otherwise sometimes, dark story. Zander’s has a nickname for Getty it’s so freaking cute “SOCKS” I will never look at a pair the same.
K. Bromberg really knows how to pull on our heartstrings. The rollercoaster of emotions that I expect while reading a K. Bromberg book where all there!  There is no better way to end this series than with Zander it was a great read I really enjoyed every second of it.. It’s one of my top reads of the year!

So we met Zander and a scared 7 year old orphan. So the leap into his adulthood was one I was worried I couldn’t imagine.  How dare I doubt the one and only K. Bromberg?

She brought me into the adult life of Zander without missing a step  The first few chapters broke me.  This poor man was still trying to come to terms with his childhood.  He thought he had but when a small box shows up at his house – it throws him into a tailspin.  His hateful words to Colton broke my heart, the words in which Colton say to him was hard to listen to also, a little tough love that Zander needed but every parent never wants to say to their child.

Zander leaves to find himself.  He retreats to Schmittys vacation home he’s purchased and plans to flip.  Who would ever think that when Zander goes to “find himself” he would find his missing half?

Getty – another character from K. Bromberg that I adore.  She has always written these female characters who are so unbelievable strong.  They may not know they are bad asses -at first – but they are.

Getty is hiding from a life she no longer wants.  She’s taken over her life, she’s working in a bar and making her way.  Yes, her mother’s best friend had offered her vacation home that she’s planning on renovating and flipping but for the time being it’s Getty’s home- her place to start fresh…alone.

The first meeting between Zander and Getty is spectacular.  The cocky (pun intended) Zander and Getty meet while they are both pretty much naked!! One going into the shower and one coming out!  The sparks fly and someone is bound to get burned.  They are both so fragile and even though they know that their attraction can go no-where – it’s more than obvious to both it’s going to be a problem

This book takes us on a journey of self discovery and growth – with some serious sexy thrown in.  Zander is all grown up and I wish I could have heard the birds and the bees talk Colton gave him because this man has skills!!!