Don’t Speak by Katy Regnery is now LIVE and FREE with #KindleUnlimited!

“Swoon. Sigh. Beautiful, gorgeous love story. You renew my faith in true love, Katy Regnery. And a brilliant take off on the little mermaid. People are going to love this one.” –Mia Sheridan, New York Times bestselling author of Archer’s Voice

In this modern retelling of The Little Mermaid, a fisherman’s daughter from an Outer Banks island untouched by time, meets the son of the North Carolina governor at a fancy party where she is working.

Laire, who wants more from life than her little island can offer, is swept away by wealthy, sophisticated Erik, who is, in turn, entranced by her naiveté and charm. The two spend a whirlwind summer together that ends on the knife-point of heartbreak and forces them to go their separate ways.

Years later, when fate finds them together once again, they will discover the terrifying depth of the secrets they kept from each other, and learn that shattered hearts can only be healed by a love that willfully refuses to die.

All novels Katy Regnery’s ~a modern fairytale~ collection are written as fundraisers. 10% of the e-book sales for in March and April 2017 will be donated.

Katy Regnery has absolutely outdone herself with this book.

How she can take a fairy tales we all grew up watching and loving and make it fresh and new? 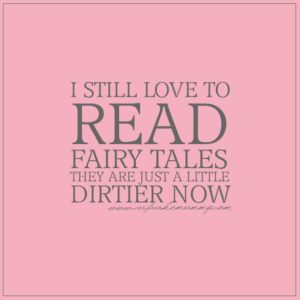 (THERE IS A LITTLE DIRTY IN THIS BOOK BUT THE PHYSICAL PART OF THEIR RELATIONSHIP IS SUCH A SMALL PART OF THE BOOK, BUT THIS MEME IS SO APPROPRIATE)

Laire – the fisherman’s daughter. Never has left her small island and is naïve yet interested in the “outside” world.

Erik – the governor’s son. Smitten at the moment their eyes met.

Their secret relationship that was one of the most beautiful and pure I have ever witnessed in a long time. She’s inexperienced, he’s not – he’s so gentle and sweet and respectful of her (A perfect prince on might say).

But their attraction and need to be in each other’s presence over rides what should be expected of them. They make….

to be together, knowing that no one would understand.

Situations become tense, lies are spoken and their relationship abruptly ends. My heart was breaking and sobbing with them both, so unaware of how each other feels.

This second chance romance will have you reading UP ALL NIGHT and loving each and every beautiful and often heart breaking and healing word.

Katy Regnery has just blown me away with this book and this series altogether.

New York Times and USA Today bestselling author Katy Regnery started her writing career by enrolling in a short story class in January 2012. One year later, she signed her first contract and Katy’s first novel was published in September 2013.

Katy’s first modern fairytale romance, The Vixen and the Vet, was nominated for a RITA® in 2015 and won the 2015 Kindle Book Award for romance. Katy’s boxed set, The English Brothers Boxed Set, Books #1–4, hit the USA Today bestseller list in 2015, and her Christmas story, Marrying Mr. English, appeared on the list a week later. In May 2016, Katy’s Blueberry Lane collection, The Winslow Brothers Boxed Set, Books #1-4, became a New York Times E-book bestseller.

In 2016, Katy signed a print-only agreement with Spencerhill Press. As a result, her Blueberry Lane paperback books will now be distributed to brick and mortar bookstores all over the United States.

Katy lives in the relative wilds of northern Fairfield County, Connecticut, where her writing room looks out at the woods, and her husband, two young children, two dogs, and one Blue Tonkinese kitten create just enough cheerful chaos to remind her that the very best love stories begin at home.