Release Day Review ~~After All by Karinna Halle 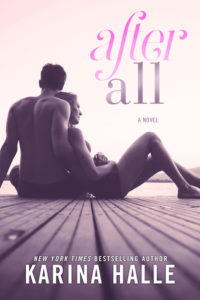 by Karina Halle
After All is a STANDALONE lovers-to-enemies-to-lovers contemporary romance from the NYT and USA Today bestselling author of The Pact and Before I Ever Met You.

Emmett Hill is the perfect gentleman.

At least that’s what his PR team wants the world to think.

Tall, handsome, and wickedly charming, Emmett is in the midst of a career comeback, having landed the role of a villain in a popular TV show. The only problem is, Emmett has come a long way from the “nice guy” characters he used to play and his old squeaky clean image is quickly being tarnished by bar fights, womanizing and bad boy behaviour. Considering he’s two years shy of forty, it’s an act he needs to drop. And fast.

At twenty-eight, Alyssa is tired and ready for a change. Her job as office manager has grown stagnant and unfulfilling, while she’s become continuously frustrated with Vancouver’s lackluster dating scene, always searching for Mr. Right in a city of Mr. Wrongs.

When Emmett and Alyssa’s paths cross at a mutual friend’s wedding, their chemistry is off-the-charts hot, culminating in a steamy one-night stand.

What neither expected was for the media catch wind of their coupling – and run with it.

Now Emmett has to convince Alyssa to date him for the sake of his image. Her curvy, cute and “normal” persona is just the ticket to smoothing out his reputation, while Emmett provides Alyssa with the excitement and change her life has been lacking.

The only problem is, the two fight like cats and dogs outside of the bedroom.

And considering their arrangement is just for show, they shouldn’t be in the bedroom with each other anyway.

Try telling them that.

I began this book at 6pm on Thursday night – in between making dinner, cleaning up dinner, doing laundry and sleep I was able to finish all but about 20 minutes of the book by Friday at 7AM!

“A one-night stand turned into a lie of epic proportions.”

I love a good pretend-to-be-my girlfriend book.  Karinna Halle did such a great job with this book, the only part for me was – I am not sure that Emmett & Alyssa were ever pretending.  From the moment they met, Alyssa was “trying” not to like Emmett (but failed within hours of meeting him).  He was enthralled at first glance and once he was “warned to stay away” from Alyssa the hunt began.

Emmett is an absolute sweet heart and Alyssa is a bit jaded.  They both believe they are undeserving or incapable of love.   But as a fake couple, they just may find what they aren’t looking for.  There is a bit of angst and sometimes they made me crazy thinking  they weren’t worthy of their feeling, which made me sad, quite frankly.

“He can’t even pretend to he can be the man I need him to be.”

This book make me cry during the prologue and there were a few giggles a while reading and yes – this girl had a hot flash or two while reading (it was beyond blushing) and genuinely enjoyed reading this book.  Karinna Halle has the ability to draw you, as a reader, into her storyline and keep you there, even after the last page is read.

A Great, fun, easy and sexy read that was just perfect for me.

Side note: I really enjoy a great romance book that features “older” couples.  Our Emmitt is a whopping 38 years old!!

Nook and IBooks are on preorder, will release on July 4.