Dreams.
I used to have them—before the nightmares started.
I dreamed of nice guys, love…normalcy.
Things like reading the Sunday paper in bed with my lover.

But who needs dreams when your reality is filled with a string of faceless dominating men in uniform? Men that pack a thick bulge and are only too happy to satisfy my deviant sexual cravings.

And then HE walked through the door and shared with me, a total stranger, his intimate dream of love. Damn him for verbalizing every single detail of the dream I buried long ago.

And now I don’t know how I’m going to live without that dream.
Or him.

Julie Richman and Henry Clark have RUINED ME. I HAVE THE WORST BOOK HANGOVER. I haven’t even looked at another book in two days. I tried my hardest to read as slow as possible, savoring and digesting every word. I know my review could never do this book justice, but I shall try…..

I love when a book is able to put a spell on you, leaving you immobilized and rendering you speechless. There aren’t enough adjectives and eloquence to describe the beauty in Henry’s End. As I read it, I felt an indescribable connection to Henry Clark. So intense, I literally felt every emotion he did. I cried when he cried and I hurt when he hurt. I also had butterflies swarming in my belly, falling in love right along side him, just as he did. I wanted to climb inside the book and take Henry into reality. I can’t wrap my head around the fact that is isn’t REAL. To say I love him is an understatement. My connection wasn’t limited to Henry, it was for all the characters throughout the book. I am in awe of the magnitude of my feelings for them. It felt like my heart was actually being taken out of my chest. I’m was happy I read this in the privacy of my home, because had I been in public, I would have looked crazy. I could not control the way my body responded to this book, I was either squirming, crying, laughing or I was ooohhhing and ahhhhing out loud!

This book follows the journey of Henry Clark, as he navigates his way through life and love. He’s a beyond beautiful gay man inside and out. Someone you would be honored to call your friend. This book has too many wonderful attributes to list. You have to read it to experience the wonders of Henry…..

I think if everyone read this book, the world would be a much more accepting place. It exudes love. Thank you Julie Richman for opening our eyes to just how beautiful the gay community can be. 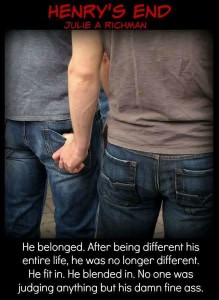 Holding eye contact with the man, meeting the challenge head on, Henry didn’t flinch. He wanted him to know that he was aware that he was being watched. The energy between the two was sharp and direct. There was no mistaking that contact had been made, and Henry could feel his stomach cramping with excitement, and his balls tightening with desire. This was a man he had dreamed about his whole life. He exuded absolute power. Envisioning him in uniform made Henry inexplicably ache even more.

Definitely a Marine, he thought. A lieutenant? A captain? This man gave orders and expected them to be followed. He commanded. Demanded. And received.

Turning away, Henry made his way through the crowd in search of the bathroom. Mostly he needed his air back and a moment to process what had transpired. He knew that wasn’t all in his head.

The man hadn’t just cruised him.

Heading into the bathroom, the site of an open stall door felt like an immediate godsend and he needed to get behind it, alone. Quickly.

It happened so fast, he wasn’t quite sure how it occurred. Entering the stall, he turned to close the door but was propelled against the metal stall wall to his right, knocking the air out of him. He heard the muffled sound of the stall door latch being locked. The larger man pinned him with his body, his muscular chest pressing Henry flush against the cold metal. The cool smooth surface felt good against his hot, sunburned cheek. Henry could feel the man’s cock pressed against his ass crack on the outside of his bike shorts and wondered if the guy’s cock was still in his pants or not. It wasn’t until that moment that he realized the man had him in a loose choke hold. He didn’t feel fear, and somehow instinctually knew this guy wasn’t going to hurt him. He was establishing his control and position.

With lips next to Henry’s ear, his voice was little more than a growl. “Is that what you want? Little boys? Little boys that will never satisfy you? Is that what you want?” His sizable cock pressed harder against Henry’s ass. With his free hand, the man reached around to the front of Henry’s bike shorts and found exactly what he was looking for – a hard, excited cock. Giving it a squeeze through the slippery material of his bike shorts, Henry hardened immediately to the man’s touch. Continuing to fondle him through the thin fabric, while simultaneously pressing him from behind, the Marine hissed into Henry’s ear, “I asked you a question.”

Brain cells blown away by the physical assault both front and rear, for the life of him, Henry could not remember the man’s question and answered by pressing his junk harder into the guy’s hand, needing to feel possessed by his grasp. He did not disappoint Henry as he squeezed his balls tighter.

“You still want little boys?” he growled, his arm tightening around Henry’s neck.

The moment Henry felt the crook of his arm squeeze his neck, he began to pump himself into the man’s hand, “No. I don’t want little boys.”

“Then what is it you want?” The man had Henry by his cock and was pressing him firmly against his own hard-on, grinding harshly against his ass.

“Good. And I don’t want you dancing with those boys. Do you understand that?”

With his hand firmly encasing Henry’s privates, the Marine pressed the smaller man against him and continued to let Henry feel the pressure of his cock against his ass.

Henry leaned his weight back into him, eyes closed. There was nothing in the world except the guy’s hand kneading and pressing his balls. He wanted to stay in the moment forever. Submit to whatever the man wanted from him.

And then he was gone. Leaving Henry against the wall with a raging hard-on and a need to feel the Marine’s hands and cock again, hear his voice, low and raspy, in his ear. Without removing an article of clothing or coming, he had never had a sexual experience that excited him as much, and he knew, beyond a shadow of a doubt, that he would always remember the sublime feeling of being restrained by this man.

Henry was deeply ensconced in his own head, making resolutions about moving on, not paying attention to his surroundings, or seeing the man, as he approached his car. He was leaning against the hood, his thick muscled arms folded across his chest. Calm, cool, collected, in charge and so damn freaking handsome.

“Your place?” was all he said.

Henry felt the sharp stab in his heart as his adrenal glands shot a release of hormones into his blood stream. Shaking his head no, he was shocked at how cool and calm his voice sounded, when he was anything but, “No. I don’t think so. You haven’t even bought me a drink yet.”

Walking around the big Marine to the driver’s side, Henry hit the remote, unlocking the door.

With a palm to the solar plexus to stop him, “Where are you going?” the Marine asked.

“I thought you wanted me to buy you a drink?”

Stepping around the Marine, Henry opened the door to his black BMW and got in. “I do…” and he closed the door and started the engine.

Rolling down the window, he added with a smile, “… on Sunday.” Gunning the Beamer’s engine, he left the Marine in the dusty parking lot with a smile on his handsome face.

Well played, Henry congratulated himself. Let him ache for me as much as I’ve been aching for him.

USA Today Bestselling author Julie A. Richman is a native New Yorker living deep in the heart of Texas. A creative writing major in college, reading and writing fiction has always been a passion. Julie began her corporate career in publishing in NYC and writing played a major role throughout her career as she created and wrote marketing, advertising, direct mail and fundraising materials for Fortune 500 corporations, advertising agencies and non-profit organizations. She is an award winning nature photographer plagued with insatiable wanderlust. Julie and her husband have one son and a white German Shepherd named Juneau.

Where to find Julie: