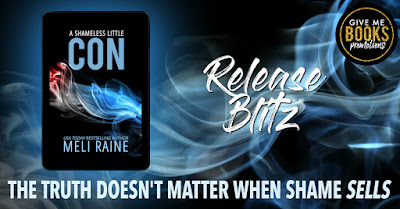 Title: A Shameless Little Con
Series: The Shameless Series #1
Author: Meli Raine
Genre: Romantic Suspense
Release Date: January 30, 2018
Blurb
I didn’t do
it.
I never
betrayed my friend.
Last year,
I was kidnapped along with presidential candidate’s daughter Lindsay Bosworth,
forced to help her assailants, my mother implicated in one of the biggest
political scandals in American history.
I’ve been
cleared of any wrongdoing, but that doesn’t matter. Once you’re tried by the media,
you’re guilty as sin. The truth doesn’t get the public’s attention.
But shame?
Shame sells.
And
everyone assumes you’re tainted.
Now I have
my own personal security team, courtesy of the United States government. Not
the one you learned about in civics class, though.
I’m being
tracked by the deep state. The shadow government. They’ve assigned Silas
Gentian to be with me twenty-four seven. He thinks he knows everything about me
– all of it bad — and he does.
On paper.
Like
everyone else, he assumes I’m a traitor. A backstabber. A betrayer. Someone who
helped a group of violent psychopaths, puppets of powerful men in Washington
who made me into a tool.
Yet I see
how he looks at me. True desire can’t be faked.
Or hidden.
And that
goes both ways.
He assumes
I’m trying to fool him.
And he
might be right.
But not for
the reasons he thinks.
A Shameless Little Con is the first book in the Shameless
trilogy by USA Today bestselling author Meli Raine.
A Shameless
Little Lie (Book 2 ~ Coming March 27, 2018)
A Shameless
Little Bet (Book 3 ~ Coming May 29, 2018)

Wow! This was full of suspense. It caused emotional overload. From the first page I knew I wasn’t going to be able to put it down. Meli Raine is on my radar. I really look forward to seeing were she takes this series. I was blown away by the plot twist.. with every page there was something that I never saw coming. What a cliffhanger! My mind is spinning from trying to figure out the clues.

Jane is under protection due to her implications of a crime. Lindsey and Jane have been friends for many years, but one night changed everything. People who they thought were friends did the unspeakable. Jane has become slashed all over social media with daily death threats. Jane is trying to prove her innocence, but no one believes her. The government officials have poked and probed Jane. The corruption, lies and deceit play a role throughout.
When your life is all over the media, you can’t hide forever… How long before someone will break? Jane just wants her life back, but will that ever happen or will she still be public enemy?
ADD TO GOODREADS 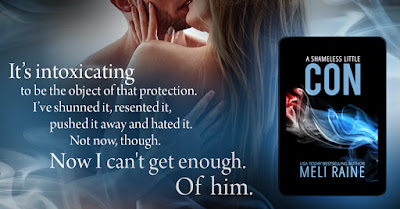 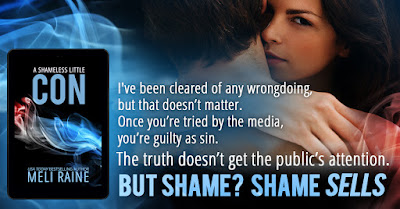 Excerpt
“Has it
ever occurred to you that maybe, just maybe, if you thought it through, there
might be a completely different angle on every part of this mess? That maybe
I’m telling the truth?” I taunt him. That’s how this feels–like nothing but a
nasty game. The push-pull of wanting him to treat me like a human being and
wanting to lash out and hurt him is infuriating, but it is better than sitting
here and taking his negativity like a passive little doormat.
“Of course
I have.”
“And you’ve
rejected that. Completely.”
“Yes.”
“Then
you’re really bad at your job, Silas,” I say, letting all the bitterness and
contempt come through my voice.
“You’ve
wounded me, Jane.” Turns out he can do contempt, too. Better than I can.
“I mean it.
Anyone whose job is to protect people can’t be such an absolutist. It makes you
weak. Gives other people an easy shot at you.”
“‘Other
people’? Do you mean people like you?”
“No. I mean
people like the ones who attacked Lindsay.”
“Right.
People like you.”
I shake my
head slowly, the waves of panic flowing through me, giving in to them. Letting
them come because what choice do I have?
And guess
what?
You can
feel all of that panic, let the anxiety overwhelm you, nearly black out from
the incongruity of being shamed, driving toward an unknown destination where
you have no control–
–and still
stand up for yourself.
“I have
nothing left to lose, Silas. My mom is dead, my reputation’s beyond
salvageable, I don’t have a job or a place to live, and everywhere I go
someone’s trying to kill me. Even my online world is nothing but garbage and
threats from shitlords. So, as a simple thought exercise, can you try? You’re
protecting me. Someone assigned you to me. Give me the courtesy of doing your
job completely. If I’m stuck with you–and I know I am–I, at least, want you to
do your best.” 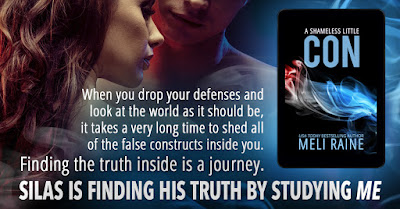 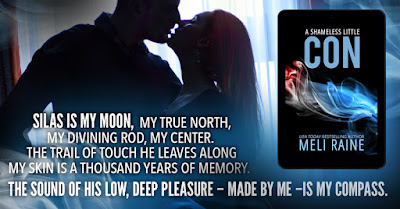 Author Bio
Meli Raine
writes romantic suspense with hot bikers, intense undercover DEA agents, bad
boys turned good, and Special Ops heroes — and the women who love them.
Meli rode
her first motorcycle when she was five years old, but she played in the ocean
long before that. She lives in New England with her family.
Author Links
WEBSITE
NEWSLETTER
FACEBOOK 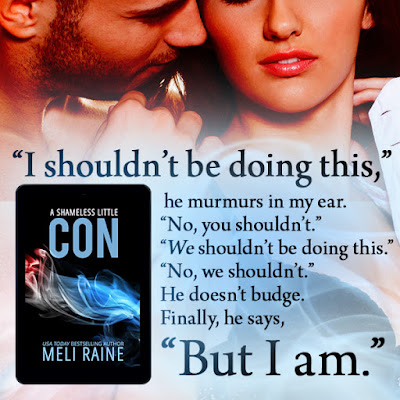