Release Blitz & Review ~~ Struck From The Record by KA Linde

STRUCK FROM THE RECORD 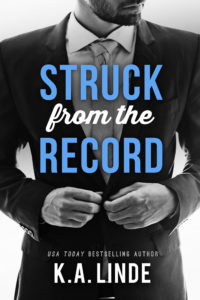 Clay Maxwell is a smart, quick witted, sex-driven, manwhore with the good looks to match. Plenty of women have shared his bed, but only one has ever been constant, Andrea.

Their rules were simple. When they’re together, it’s just the two of them. When they’re apart, anything is fair game. And it worked. For ten years.

But one of them has changed the game…

Clay must decide if his player ways are worth losing the one girl who has always been there. 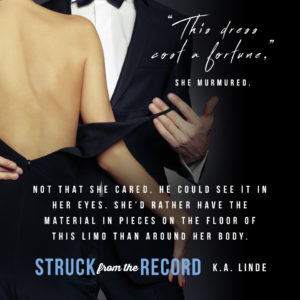 “Yet another awesome read from K.A. Linde! Clay is HOT and BAD in the best way possible, you won’t be able to put it down! I literally was begging for more!” -A.L. Jackson, NYT Bestselling Author

When I read the Record Series by Ka Linde I thought to myself “Brady Maxwell, the swooniest man ever!” – I think Clay might be giving his big brother a run for his money!

When we met Clay in the Record series I thought “seriously, this man is a piece of work, and his “girlfriend”, Andrea is a ditz”. His distain for Brady, rules his life. In SFTR we get insight as to why Clay feels this way he does about Brady. Clay has spent his life living in Brady’s shadow.

We saw a few sneak peaks of Clay in the Record series and he always had a snide remark or joke to keep you smiling or cringing. Well this is it’s an entire book of that Clay. One moment you will laugh at Clay’s wit and the next your heart breaks for him. Everything you see on the outside isn’t always what’s really going on.

The hard ass, no nonsense, cocky hot guy you thought he was becomes a little more introspective and you get to watch as he grows and matures.

I honestly didn’t think that Clay could offer me all that I loved in Brady, but he honestly did. I loved watching Clay and Andrea navigate their way through changes.

And yes, KA Linde brought some angst, it’s wouldn’t be a KA Linde book if there wasn’t!

And to see a sneak peak back into Liz and Brady’s life was just spectacular!

An ARC was provided to Blushing Babes Are Up All Night in return for an honest review. 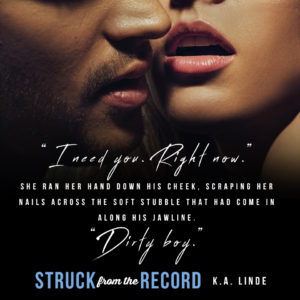 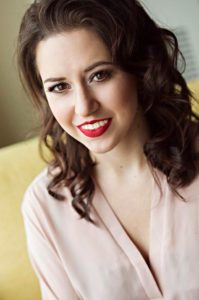 K.A. Linde is the USA Today bestselling author of the Avoiding series and the All That Glitters series as well as seven additional novels. She grew up as a military brat traveling the United States and even landing for a brief stint in Australia. She has a Masters degree in political science from the University of Georgia and is the current head coach of the Duke University dance team.

Tags: KA LindeStruck From The Record