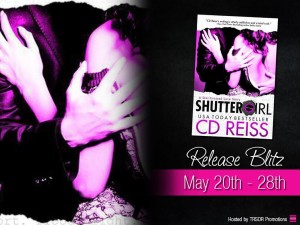 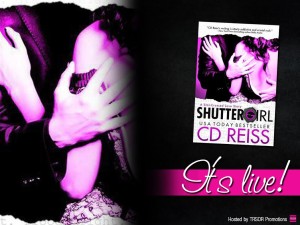 Are you ready for a different kind of love story? 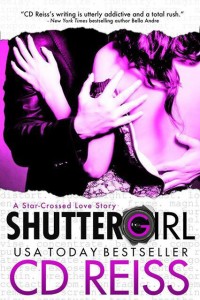 ONE movie star on the cusp of greatness

ONE broken girl who touched him

TEN years to forget her

A MILLION stories in Hollywood

I am not hurt.

I don’t need a second chance with him, or a life I thought I had.

While he was out forgetting me to become a movie star, I was building a career out of nothing. A career as a paparazzi, but a career. For a foster kid who bounced around every home in Los Angeles, that wasn’t easy.

This camera is all I have.

He’s nothing to me. Every time I take his picture and sell it, I remind myself that I did it all without him or his approval, his cinnamon smell or his clear green eyes. He lights up the screen like a celestial body, but he’s nothing but a paycheck to me.

He can throw my camera off a balcony, and nothing has to change. We can stay king and queen of the same city, and different worlds.

Except this is Hollywood, and here, anything can happen. 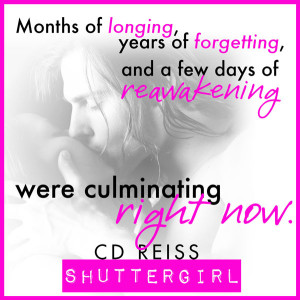 I have been told my so many friends to READ A CD REISS book already!  So this book is my first CD Reiss book and what a great start. (What I am hearing is this is very different from other books by her)

Michael, the movie star and Laine the paparazzi, how could they ever be together?

They may have met in high school, but that’s where their similarities end.  Michael was a child of an affluent hollywood couple. Laine, the foster child that went from home to home, looking for security and love.  She kept to herself in high school and had a chance meeting with Michael.  Their connection is high school was innocent but meaningful.  It was life altering for Laine, unbeknownst to Michael.  He always wondered what happened, he always saw her behind the camera but never approached her.

This is a second chance love story, which always makes me smile! Their reconnection was a doozie, again life altering.  Can a paparazzi who’s life it is to photograph movie stars BE accepted in the his world? Can she be in both worlds?  All she knows is being a paparazzi and all he knows is being a movie star! Can these 2 opposing worlds come together?

Laine…this woman was such a bad as, she was dealt a shit life, she didn’t allow that to make her a statistic, she worked hard and became a success!  Michael may have been handed a easy life, but he still worked and works hard everyday to continue to be the best he can.  This isn’t a story about an entitled alpha male movie star, Michael is a sweet, gentle but a take charge kind of guy!  Half of his fight, is Laine allowing herself to be cared for by Michael.  CD Riess’s  writing style was captivating, I am so glad I had the chance to watch this second chance love story unfold in front of my eyes and watch these two totally different people trying to piece their oh-so-different worlds together to maybe, just maybe get the happiness they both deserve.

An ARC was received for an honest review.

I stroked his hair, waist deep in peace, all worry gone for the moment, and floating in no more than an ocean of gratitude. I must have been more vulnerable than I realized, or he’d reopened some wound with his kindness, because though my sweet reverie stayed, as the minutes passed, a layer of need fitted itself on top of it.

I needed to tell him, if not the details, the outlines of who I was.

“I want you to know,” I whispered, starting somewhere small, then everything I didn’t want to say spilled out. “I have stuff. I’ve never been to jail, but you know, it’s stuff, and it’s ugly, and it scares me. Because, I mean, you’re so perfect, and I’m… I’m just a mess. I’m not whole. I’m a bunch of pieces of a person I cobbled together.” My eyes got wet when I thought of the comparisons between us and that picture in my silverware drawer. “So if you have to move on when you realize that, I’ll understand. You have an image, and if anyone understands protecting a career, it’s me. I mean, I’ll be mad, don’t get that wrong, but also.” I swallowed and blinked, shifting my head so he wouldn’t feel the tear on his forehead. “I won’t blame you.”

I waited for an answer. Anything. A change in position or a word on any subject. The weather. Sports. Something. But all he did was breathe.

I smiled so wide, tears fell into my mouth. He was sleeping. 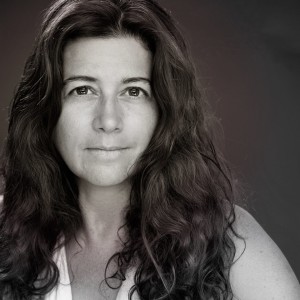 CD Reiss is a USA Today and Amazon bestseller. She still has to chop wood and carry water, which was buried in the fine print. Her lawyer is working it out with God but in the meantime, if you call and she doesn’t pick up, she’s at the well, hauling buckets.

Critics have dubbed the books “poetic,” “literary,” and “hauntingly atmospheric,” which is flattering enough for her to put it in a bio, but embarrassing enough for her not to tell her husband, or he might think she’s some sort of braggart who’s too good to give the toilets a once-over every couple of weeks or chop a cord of wood.

If you meet her in person, you should call her Christine.