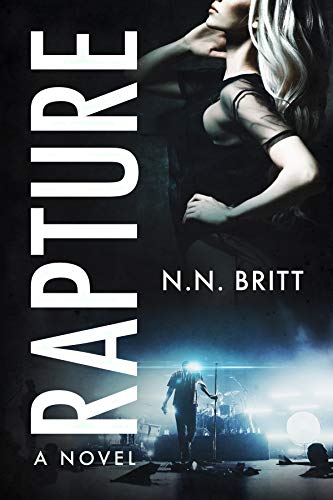 Rapture, by N.N. Britt is the author’s debut novel. It’s a story about a woman who has lost a child and has an enormous amount of damage. I couldn’t help wanting to put myself in her shoes and wonder how I would feel. I felt like N. N. Britt did a good job capturing all the pain the heroine went through.  This book is also a rocker romance. I love a good rocker romance. Justice the rock god who was named #28 sexiest man alive, feels so many new emotions toward our heroine. It was an interesting mix, how he struggled between what his band was, his maturing feelings toward his artistry and how the pair helped each other grow.

I did struggle a bit with some of the writing. I felt like some of the sentences were so long that I got lost in what the author was talking about. There were often so many adjectives that I had to reread to remember what she was talking about. It is 400 pages so my guess it’s around 150,000 words, so be prepared for a long one. However, being her debut, I think that this author can really learn to hone her craft.

Synopsis
She is a grieving mother. He is a spoiled rock idol. The only thing they have in common is a flashy tabloid headline. Or so they think.

Running away from her tragedies and the demise of her marriage, Hazel Alexander retreats to a friend’s Lake Tahoe cabin with big plans to drown her memories in bottles of wine. Being dragged into someone else’s messy, high-profile divorce is not what she needs.

Especially if that someone else is Justice Cross, the frontman of the popular rock band The Deviant.

Born into a family of rock royalty, Justice lives his life fast and easy. When he comes across Hazel while at a local bar, his gallant attempt to get her home safely takes a complicated turn.

A PR nightmare forcing Justice and Hazel to spend time together triggers unexpected and intense feelings between the two.

With the constant attention of fans, haters, and press, now it’s up to Hazel and Justice whether they want to fight for their relationship or end it once and for all.

About the Author
N.N. Britt is a Los Angeles-based music journalist and photographer whose articles appeared in numerous publications. Her photos have graced t-shirts, billboards, and CD covers. When she is not writing or drinking coffee, she is probably reading or attending a heavy metal show.