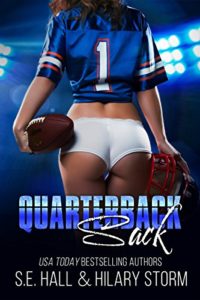 Rush Riggins has it all. His sexy arrogance, perfectly honed body and irresistible charisma is everything you’d expect in a single, NFL quarterback. What woman wouldn’t love to be pursued by him?

She’s made it very clear that his relentless flirtation won’t change her mind. It’s her only rule. She can’t date a football player.

But Rush didn’t get where he is in life by giving up… he’s a very persistent man… and the end-zone isn’t the only line he plans to cross.

I loved SE Hall’s “Evolve” Series and was excited to see a new football series. The story starts out hot, really hot. OK….steamy *fans self*. Unfortunately, there is not too much more. It is good if you want a quick, hot, dirty read but I would have liked just a little more character development and story line.
Rush Riggins, the back-up quarterback for the Tennessee Thunder heads out to celebrate after a winning game. Ava Vanderbilt is also out with friends for a much needed stress reliever. She meets Rush and bam! The come together in a super-sexy, super-hot one night stand! They don’t exchange names or numbers.

Sex is my best game. Football comes in as a close second.

As the Back-up quarterback for the Tennessee Thunder, Rush is alpha, arrogant, and athletic. After the regular quarterback is injured, Rush takes over mid game and crushes the other team. Rush has worked long and hard for this opportunity.
Ava Vanderbilt is the loving granddaughter to Walter Vanderbilt, owner of the Tennessee Thunder. Her grandfather always kept her away from football….

He always sheltered me from the game, never wanting me to get involved with a player, citing I deserved a man who’d be home every night.
Ava’s grandfather passes away and she inherits the wildly popular Tennessee Thunder team. She is shocked but wants to rise to the challenge and take care of her grandfather’s “baby”.
Ava and Rush soon discover their connection. This is where I would have liked a bit more content and character development. As I said above, if you want a quick, hot dirty read, then this is for you. I will surely read the next book in the ‘Full Contact Football Romance’ series and hope for more!