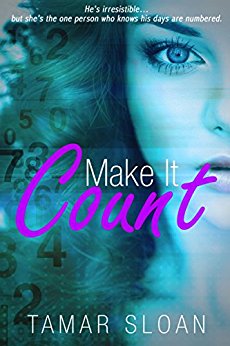 Casey’s touch can reveal the one thing a person would never want to know — the number of days they have left to live.

By the time Casey turns seventeen, she’s learned to withdraw. But the phobia she fakes in order to avoid human contact is sorely tested by hot, persistent, motorcycle riding PJ. For a girl who craves contact, maple-eyed PJ is impossible to resist. When the inevitable happens; when hands, bodies and lips collide, Casey sees PJ’s number, one that can only be seen as a cruel twist of fate.

Now she must decide. Will she continue counting the days of her life, or start living a life that counts?

With the memorable writing and humor of writers such as Jandy Nelson’s I’ll Give You the Sun blended with the attitude, chemistry and unexpected plot twists of Katie McGarry’s best sellers, Make it Count is a romance that will leave you swooning and smiling.

This year I’ve really embraced a new genre. I’ve always shied away from paranormals or books with even paranormal elements mostly because I believed them to be unbelievable and not really worth my time… Why? When there is no way this could ever be real. Let’s just say, I’ve learned a lot from the paranormal genre especially with reading 5 or more this year.

“Touch is so fundamental to human life, but so is death. And the two were inescapably linked for me.”

Make it Count is a young adult romance with paranormal elements. Casey is a teenage girl living in Australia with the ability to see a person’s number of days left on this earth with just a touch. An ability that has caged her and sworn off the touch of people other than her family. But when she meets PJ, she learns what the numbers really mean and what life is really about. Watching PJ learn his self-worth and watching Casey live a life worth living was so inspiring. This book definitely showed the bigger picture. True to YA, a lesson always lurks just below the surface and this one screams YOLO!

“Do our choices change our trajectories? Or did destiny set the ball in motion a gazillion years ago, with the the infinite outcomes carefully plotted out, the intersections and journeys predetermined as we cling to the illusion we have some sort of control.”

The writing is definitely good, but it has a different feel to it and some different slang and terminology as the setting is in Australia, but nothing that really took from the story.  I do wish there would have been some more communication between Casey and PJ even if it was just them getting to know each other. But the touch was so heavily relied on for their relationship. Some of the transitions were a little weak where I had to go back and make sure I didn’t skip a sentence, but overall, a very enjoyable read. I look forward to more from Tamar. 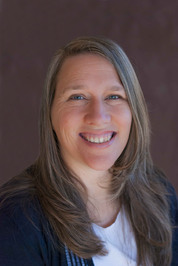 Tamar’s love of romance started way back in adolescence (anyone remember Silhouette romances? She devoured them) but she never thought she’d write them. But life does love a good curve ball and one day she woke up from a dream and a concept that wouldn’t go away, and much cursing and passion filled hours later, the Prime Prophecy Series became a reality. The next thing she knew more characters came knocking, demanding for their lessons to be shared and their stories to be told. Tamar love’s sharing their journeys of discovering life and love beyond our comfort zones.

As a youth worker who became and teacher and now a school psychologist, writing young adult books was an inevitability that became a passion. As a long time reader of romance and a strong believer in the healing power of connection, romance was always going be the central focus of Tamar’s writing.

When not reading, writing or working with teens, Tamar can be found with my ever-patient husband and two beautiful sons enjoying country life on their small acreage in the Australian bush.