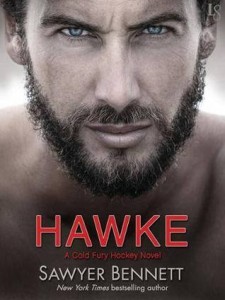 The Carolina Cold Fury hockey team proves that love is a power play. As Sawyer Bennett’s New York Times bestselling series continues, the league’s most notorious party animal gets blindsided by the one that got away.

Off the ice, elite defenseman Hawke Therrien enjoys his fair share of booze and good times. And why shouldn’t he? He’s worked his way up from the minor leagues and made himself a star. The only thing Hawke misses from that life is the pierced, tattooed free spirit who broke his heart without so much as an explanation. She’s almost unrecognizable when she walks back into his life seven years later—except for the look in her eyes that feels like a punch to the gut.

Vale Campbell isn’t the same girl she was at twenty. As crazy as she was about Hawke, her reckless behavior and out-of-control drinking were starting to scare her. She had to clean up her act, and that would never happen with Hawke around. Cutting him loose was the hardest thing Vale ever had to do—until now. Because she’s still crazy about Hawke. And if he could ever learn to forgive her, they just might have a future together.

Here we in the throes of the NHL hockey season, and Sawyer Bennett offers us yet another way to enjoy the game. Hawke is the latest gift to us in the Cold Fury Hockey series. In this fifth offering, the story asks the question can young, reckless love grow into something passionate and ever after when both parties grow into better versions of themselves.

Hawke Therrein and Vale Campbell were the wild couple in high school. Hawke was a badass party boy and Vale was the free spirit that stole his heart. When Hawke moved up to the big leagues, Vale cut him loose and broke his heart. His pain was taken out on the ice and through the many women and bottles he went through. Vale, on the other hand, grew up fast. Ending her relationship with Hawke was one of the hardest things she’d ever do, but it wasn’t without good reason. Vale could feel herself slipping down the slope of irresponsible behavior, and she knew that that wasn’t what she wanted for herself. While Hawke spends the years cutting it up on the ice, Vale gets herself together, goes to school and becomes an athletic trainer. Life conspires to bring them together again as they both are part of the Cold Fury organization forcing one to forgive and the other to prove that what they shared so long ago is still very real and just as deep.

There is no doubt that I love a book with a hot jock. I love them all…the football players, the baseball players, but the boys that play on the ice hold a special place in my heart. Don’t ask me why, just know that they do. Sawyer Bennett has once again done a fabulous job of bringing the heat onto the ice. While I must say that there were times where I wanted to act as a mediator for Hawke and Vale. Good grief, they couldn’t get on the same page! That said, I thoroughly enjoyed watching the two of them find their way back to each other. Hawke’s story is a quick read, one that can be enjoyed while waiting for the face-off of your favorite NHL team. 😉 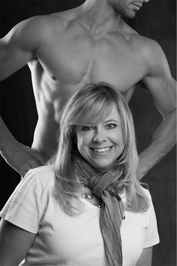 New York Times and USA Today Bestselling Author, Sawyer Bennett is a snarky southern woman and reformed trial lawyer who decided to finally start putting on paper all of the stories that were floating in her head. Her husband works for a Fortune 100 company which lets him fly all over the world while she stays at home with their daughter and two big, furry dogs who hog the bed. Sawyer would like to report she doesn’t have many weaknesses but can be bribed with a nominal amount of milk chocolate.

Sawyer is the author of several contemporary romances including the popular Off Series, the Legal Affairs Series, the Last Call Series and the Wicked Horse Series. She also writes the Cold Fury Series for Random House