New Review: The Vixen and the Vet by Katy Regnery 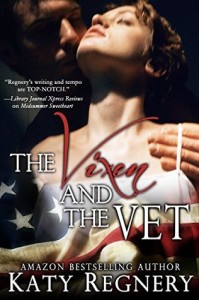 Burned by an unreliable source, Savannah Carmichael, returns to her hometown of Danvers, Virginia with her once-promising journalism career in ruins. Given the opportunity to get her skin back in the game by writing a patriotic human interest piece, Savannah turns her attention to the town hermit, Asher Lee, a wounded veteran who returned to Danvers eight years ago, and hasn’t been seen since.

After an IED explosion in Afghanistan took Asher’s hand and disfigured half of his face, he’s lived a quiet life on the outskirts of Danvers where the locals respect his privacy…that is, until Savannah Carmichael comes calling in a borrowed sundress and a plate of homemade brownies. When Asher agrees to be interviewed by Savannah, he starts feeling things for the beautiful reporter that he hasn’t felt in years.

Misfits in small-town Danvers, Savannah and Asher create a bond right away, touching each other’s hearts in ways neither thought possible. When a terrible mistake threatens to drive them apart, they’ll have to decide if the love they found in one another’s arms is strong enough to fight for their hard-won happily ever after.

As an Army wife, nothing hits closer to my heart than real-life stories of wounded warriors returning home and trying to reenter a society that doesn’t necessarily know how to make that reentry easy. It’s through no fault of anyone. Seeing a veteran who has lost a limb or bears the visible scars of war touches a vulnerable part in most everyone. Not only did this person fight for freedom, they have been forced to find a strength and will to survive that many people can’t imagine trying to find. Katy Regnery’s The Vixen and The Vet describes how one man’s scars of war left him a hermit until one person saw past the physical and emotional wounds to the man behind them.

Asher Lee came home from Afghanistan missing more than his hand. He came home bearing more than just the visible evidence of his injuries. Asher lost a part of himself, his pride and dignity. Upon his return to his hometown, Asher is treated like a monster instead of a hero. Unwilling to be treated like the town “freak”,  he retreats to his family home and isn’t seen by anyone is town for eight years. That is until a young journalist comes calling with a request for an interview.

Savannah Carmichael will do just about anything to try and resurrect her career as a newspaper journalist. After being taken by an unreliable source, Savannah’s dreams of being an investigative journalist are gone. When she is offered the chance to write a human interest story for another paper, Savannah takes it even though Lifestyles isn’t her forte. All she has to do is write a patriotic, slice of life story in time for the 4th of July. After considering the options of finding a military hero in her hometown, Savannah decides to ask the town hermit and local war hero for an interview.

I’m not going to tell you much more than that. I will tell you that The Vixen and the Vet is a 4.5 star read for me. I laughed, I cried (ok…I bawled), I swooned and felt giddy butterflies through most of the book. Asher’s injuries take nothing away from the sexy, intelligent man that he is. In fact, I stopped picturing him with his injuries and just saw him as a man who has been lost for so long and can finally accept love from someone. The way Savannah sees past Asher’s scars and injuries reminds me of all of the real life military wives who see past their man’s limitations or wounds and just see the men that they have always loved.

I really loved this book. The love story and HEA were the kind that make you sigh and shed happy tears, but there was more that got to me. In her Dedication, Katy Regnery dedicates her book to her father for making her brother and her stand up at parades as veterans went past. As the wife of a veteran, I cannot express how much that statement means to me. In addition to making me cry before I even started the story, Katy brought tears to my eyes again at the end of the book and not because of the story. Through the months of June and July, she will be donating 50% of the profits from the sales of The Vixen and the Vet to Operation Mend. This amazing program offers returning veterans the opportunity to be treated by the nation’s top plastic and reconstructive surgeons. The program also provides much needed emotional support to the veterans and their families.

From this proud Army wife…thank you, Katy.

KATY REGNERY, award-winning romance novelist, has always loved telling a good story and credits her mother with making funny, heartwarming tales come alive throughout her childhood. A lifelong devotee of all romance writing from Edwardian to present-day, it was just a matter of time before Katy tried her hand at writing a love story of her own.

As it turned out, one love story turned into a series of five Heart of Montana romances, following the love lives of the Yellowstone-based Lindstrom siblings, their friends and family. Katy is also the author of the Enchanted Places series, launching in January 2014 with Playing for Love at Deep Haven, which will be followed by an additional seven books throughout 2014-2016. In addition to contemporary romance, Katy also writes paranormal romance under the pseudonym K.P. Kelley. It’s You, the story of star-crossed lovers, takes place in northern New England and the forests north of Quebec.

Speaking of forests, Katy lives in the relative-wilds of northern Fairfield County, Connecticut where her writing room looks out at the woods and her husband, two young children and two dogs create just enough cheerful chaos to remind her that the very best love stories of all are the messy and unexpected ones.