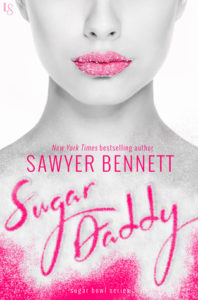 Seduction has never been so sweet! The New York Timesbestselling author of the Cold Fury series—Alex, Garrett, Zack,and Ryker—returns with the first novel in a hot new trilogy.

Sela Halstead lost her innocence in a way that no sixteen-year-old should ever have to endure. She’s spent years trying to forget that night even while wondering about the identities of the monsters who brutalized her—until a telltale tattoo flashes across Sela’s TV screen. The incriminating ink belongs to Jonathon Townsend, the millionaire founder of The Sugar Bowl, a website that matches rich older men with impressionable young women. Obsessed with revenge, Sela infiltrates Townsend’s world, only to come face-to-face with a tantalizing complication: Beckett North, his charismatic business partner.

The tech mastermind behind The Sugar Bowl, Beck always gets what he wants, in business and in bed. And yet, for a man who’s done every dirty thing imaginable, there’s something about the naïve, fresh-faced Sela that sparks his hottest fantasies. Because with her, it’s not just about sex. Beck opens up to her in ways he never has with other girls. So why does he get the feeling that she’s hiding something? In a world of pleasure and power, the shocking truth could turn them against each other—or bind them forever.

I counted up the number of Sawyer Bennett books I’ve read and they total 12. Twelve books that have told awesome stories with great characters that push certain limits, and Sugar Daddy is just like that…except it isn’t. Unlike her other books, Sugar Daddy isn’t a conventional love story. Sugar Daddy is about abuse, deceit, and revenge. The love story happens almost by accident.

Sela Halstead is a survivor of rape, but barely. She’s worked hard to get past the brutal rape, but there are still signs that she is still trying to heal. She has sex with men, but only for the guy. She’s never had a real relationship with a man. And she’s okay with that until the face of rapist appears on TV. Sela starts a downward spiral that results in an anger that only revenge can quell. Formulating a plan to murder her rapist, Sela goes for broke. What she doesn’t plan on is meeting and getting involved with her rapist’s best friend. She doesn’t plan for her feelings for him overshadowing her need for revenge. She doesn’t know what she will do when her vengeful plans cost her the only man she has ever let in and trusted.

I love Sawyer Bennett’s books, but I had a hard time with this one. I’m not sure if it’s the topic of rape that is explored in it, or if Sela’s need for revenge is the issue. I really don’t know. That said, I enjoyed Sugar Daddy, and can’t wait to read the next one. The cliffhanger at the end of this one about killed me!! Because this is a 3 book series, I’m wondering if we are set up to feel a bit uncomfortable in Book #1, so that the emotions in the second book are bigger and stronger. 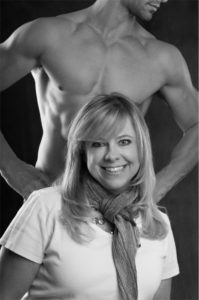 Since the release of her debut contemporary romance novel, Off Sides, in January 2013, Sawyer Bennett has released more than 30 books and has been featured on both the USA Today and New York Times bestseller lists on multiple occasions.

Sawyer likes her Bloody Mary’s strong, her martinis dirty, and her heroes a combination of the two. When not bringing fictional romance to life, Sawyer is a chauffeur, stylist, chef, maid, and personal assistant to a very active toddler, as well as full-time servant to two adorably naughty dogs. She believes in the good of others, and that a bad day can be cured with a great work-out, cake, or a combination of the two.