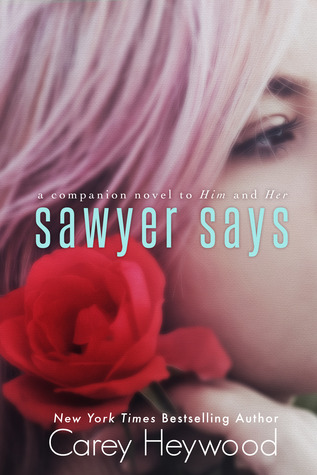 Sawyer says…
Casual flings are the only way to go.
Everyone you trust eventually leaves.
Falling in love is for anyone, but her.

What else would she say when all she knows is loss and abandonment? Sawyer Sterling learned too young that depending on anyone else will get her nothing but heartache in the end. Never shying away from outwardly showing her love, she struggles accepting it herself. Stubbornly, she vows to never risk her heart.

Dealing with revelations she never saw coming, her impulse is to distance herself from emotional entanglements. When her past collides with her present, can Jared Keller help prove to her just how wrong her assumptions are? He is the exception to her argument that everyone leaves. Will she ever see him as something she deserves? 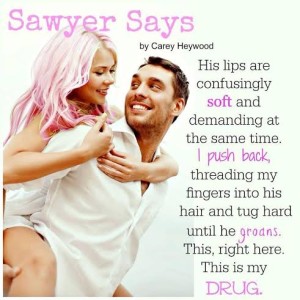 At a very young age, Sawyer’s world is rocked by death, unbelievable grief and abandonment. In the midst of this, she is forced to live with strangers, rather than her one living relative. As a result, Sawyer lives her whole life feeling unwanted and unloved. As an adult, this has led to nowhere relationship after nowhere relationship. Sawyer’s idea of a relationship is typically simply sex and when it starts to get complicated, she bails. Until…

Jared. Jared Keller has known Sawyer since she was that little girl whose world was turned upside down. He loved her then and he loves her now, he just can’t tell her because to do so could send her running. That said, when Sawyer kicks up the heat in their friendship, Jared starts to believe that taking that risk could be worth it. He just has to get Sawyer to believe that he is worth the risk too.

Sawyer Says is a companion novel to Carey Heywood’s Him series. While the characters overlap, Sawyer Says is an independent story. This book is a well-written, easy read. I lost my whole day to it!! Carey Heywood’s writing style is both straightforward and emotion invoking. There were a few times that my eyes got a bit teary. There were a few times I got a little swoony. There were lots of times I got a little hot and bothered! There were times when I wanted to smack Sawyer in the head for her self-defeating behavior, but more times where I just wanted her to know that she deserves to be loved.

I give Sawyer Says 4 stars. I have already purchased the Him series. I want to know more about Sawyer in her other relationships. I think the evolution of her relationship with Jared will be fun to read!! 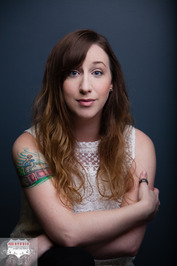 New York Times and USA Today bestselling author with six books out and many more to come. She was born and raised in Alexandria, Virginia. Ever the mild-mannered citizen, Carey spends her days working in the world of finance, and at night, she retreats into the lives of her fictional characters. Supporting her all the way are her husband, three sometimes-adorable children, and their nine-pound attack Yorkie.