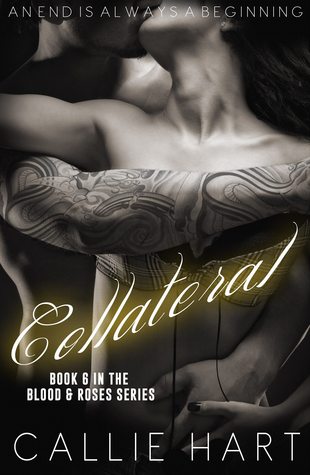 Please make sure to read Deviant, Fracture, Burn, Fallen and Twisted before downloading this book.

With Lacey missing and everything falling apart, Sloane and Zeth will do everything they can to get her back. If that includes facing off against Charlie Holsan, the DEA, and anyone else who gets in their way, then so be it.

Faced with heartbreak, danger, and the increasing need to protect the ones he loves, Zeth Mayfair is finally realizing what it means to have a family.

With her fears coming full circle, Sloane must learn that forgiveness is the only way to move forward.

Dawn C.’s 5 Star Review
Mindblowingly fan-freaking-tastic!!! Callie brought it to a whole new level In Collateral. A flawless conclusion. Every time I have read one of the books in this series, I have thought to myself, this one is the best…. Until I read the next! The series just continued to get better and better. Each book surpassing it’s predecessor, but ultimately saving the best for last. In true Callie fashion, the twists and turns kept coming. Action packed from beginning till end. I had to remember to breathe with white knuckles gripping onto my kindle. I found myself choked up and teary eyed throughout. I was an emotional basket case. Fearing for the worst but hoping for the best. I swear these books are better than any movie! Callie didn’t create just a series, she created an alternate universe!! A world where once you are immersed, you don’t want to get out. It’s Zeth’s world. A world where evil out weighs good but there is still hope.  Where devotion, loyalty and honor reign true. A place where revenge, retribution and absolution can all be attained but at what price?
In many books characters often lose themselves as they evolve. But Callie kept Zeth true to himself. As much as he evolved and grew, he was still present. Tough, acute, tenacious and always so clever. But it’s when he showed his soft vulnerable side that I literally turned to jelly. Falling more and more.. Having to remind myself that he is just a fictional character. The truth about his past comes out and it is not only shocking but totally heart-wrenching. Allowing us to see what made the man and his duffel bag… His desire to change and become a better person out weighed his demons. Maybe just maybe, he can finally get atonement and find peace??
Zeth and Sloane have gone through hell and back.  Two people who were so lost and sad. Their relationship is far from normal or conventional. It’s rough and raw. But it’s perfect for them. It had grown in time with patience and trust. Their bond is undeniable and impenetrable. Together they are a force. Having their dual POVs was one of the best parts. Being able to experience it from both sides.
I must talk about Sloane. She is my girl. She evolved right along with Zeth. She has become a true equal to him. Proving her loyalty to not only him but everyone around her. Tough as nails and balls to the wall bad ass chick! She didn’t choose the easy way, she chose Zeth! Knowing exactly what she was getting into.
(Just remember the name Ernie and you will know why I was cracking up…. It’s Zeth at his best. You gotta love him!!! GENIOUS.)
Before you even attempt to read this book…
Clear your calender for the day because you will not be able to stop reading. Have a box of tissues handy. Keep your phone or computer close. You will need to freakout with others!! I read Collateral in two days. Only stopping because I had to work.
Thank you Callie Hart for bringing us the wonderful world of Zeth Mayfair!! I hope all my reviews did your series justice. You are a brilliant author and I can not wait to see what you do next.
About the author
Callie Hart is an obsessive romantic who loves throwing a dark twist into her stories. Her characters are imperfect, flawed individuals who dictate when she eats, sleeps and breathes. Callie’s Internationally Bestselling Blood & Roses series has garnered well over 1000 5 star reviews.
Share