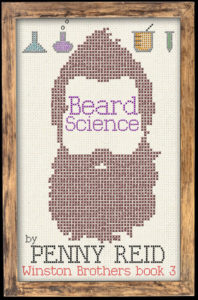 Make a deal with the devil and you might get what you want, but will it be what you need?

Jennifer Sylvester wants one thing, and that one thing is NOT to be Tennessee’s reigning Banana Cake Queen. Ever the perpetual good girl and obedient daughter, Jennifer is buckling under the weight of her social media celebrity, her mother’s ambitions, and her father’s puritanical mandates. Jennifer is officially desperate.

Cletus Winston is a puzzle wrapped in a mystery covered in conundrum sauce, and now he’s in a pickle. Despite being convinced of his own omniscience, extortion by the exalted Banana Cake Queen of Green Valley has taken him completely by surprise. So… what’s a maniacal mastermind to do?

Likely, the last thing you expect.

‘Beard Science’ is the third book in the Winston Brothers series, is a full-length romantic comedy novel, and can be read as a standalone.

It is no secret that I think that Penny Reid is a literary genius. She takes Contemporary Romance adds wit, intelligence and a unique setting and gives us a story that truly cannot be compared. In this third installment of the Winston Brothers series, we are finally, truly introduced to Cletus Winston. Not going to lie, I’ve been waiting for his story (I’m waiting for Billy’s too, but I digress.)

Cletus is the brother that is way smarter than people think he is, far more observant than anyone is comfortable with, and possibly the most suspicious person in all of Green Valley. Cletus is the guy that knows things. You don’t necessarily know what he knows, but he knows things that can get folks into trouble or save a lost soul. He’s also not available to fall for anyone. He has his reasons, but even after he explains them, a part of you shakes your head and says, “What?” He’s rarely wrong (or so he thinks) about first impressions, and finds it difficult to let go of those initial ideas when they don’t match up.

Enter Jennifer Sylvester aka The Banana Cake Queen. Bless her pea-picking little heart, Jennifer is far more than anyone in town gives her credit for. She’s smart, funny and truly kind, but she lives under the thumb of a father who doesn’t see her and a mother who wants Jennifer to be everything that she couldn’t be in her youth. Jennifer could easily be a pitiable character, but I found myself relating to her far more than I ever thought I would. The whole being someone else just to be seen is a common theme in the lives of many women. Underestimated and undervalued are two words that hit more nerves than just Jennifer’s. What brings Jennifer and Cletus together is a combination of desperation and blackmail. What results is a story that only Penny Reid could tell. 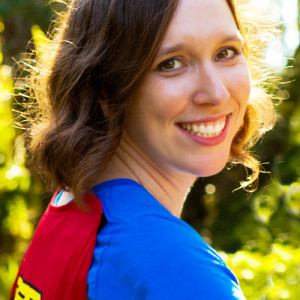 CONTACT PENNY:
Please feel free to drop her a line. She’d be happy to hijack your thoughts! You can find her on her blog or email her: pennreid at gmail dot com