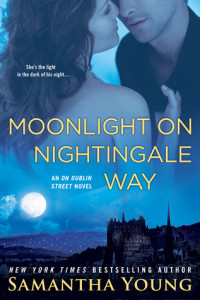 Logan from Echoes of Scotland Street is back with his own smoldering story, as the New York Times bestselling On Dublin Street series returns…
Logan spent two years paying for the mistakes he made. Now, he’s ready to start over. He has a great apartment, a good job, and plenty of women to distract him from his past. And one woman who is driving him to distraction…

Grace escaped her manipulative family by moving to a new city. Her new life, made to suit her own needs, is almost perfect. All she needs to do is find her Mr. Right—or at least figure out a way to ignore her irresistible yet annoying womanizer of a neighbor.

Grace is determined to have nothing to do with Logan until a life-changing surprise slowly begins turning the wild heartbreaker into exactly the kind of strong, stable man she’s been searching for. Only just when she begins to give into his charms, her own messy past threatens to derail everything they’ve worked to build…

Logan is arrogant and confident, a ladies man, he finds himself living next Grace who he thinks is uptight and judgement about the way he is life style. The two go out of there way to ignore one another, but when Logan finds out he has a daughter he didn’t know existed he had to change his ways… His neighbor Grace couldn’t stand him but decided to help him out with his daughter Maia.

Logan and Grace come to some type of understanding and friendship has time passes the two find themselves so attracted to each other that it’s so obvious to everyone, it’s sizzling between them and OMG moments that Logan and Grace share will have you fanning yourself. This is a true friendship that grows into so much more. I love how we get to see the characters from this series make appearances that will have you chuckling at the antics that goes on.

If you think Brandon and the rest of the guys from this series were overbearing think twice Logan is so over the top, he keeps getting his foot caught in his mouth.. He says all the wrong things which makes it hard for Grace to see what is really in front of her. I absolutely love this whole series we have seen every character grow and I know it’s only a book but when a author came write a book and make you feel every emotion and struggle from the very beginning it means a lot to a reader too.