Nets and Lies by Katie Ashley 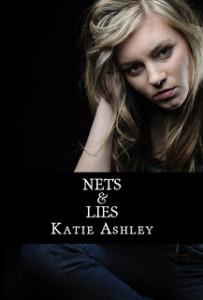 Always awkward in her 5’10 frame, eighteen year old Melanie Reeves finds her saving grace through basketball. Not only is she the varsity team captain, she’s the pride of Coach Thompson, who holds the keys to a college scholarship. Melanie has also found ‘courtly’ love with Will, Coach T’s handsome, ball-playing son. When Melanie is on the court, everything is perfect….until she is forced to face an opponent who doesn’t play by the rules.Jordan Solano’s power lies in her beauty and sex appeal. Never afraid of breaking the rules, she engages in a scandalous flirtation with the school’s married basketball coach. But the flirtation quickly turns into accusation, and Coach T’s job and reputation are placed in jeopardy after Jordan charges him with rape. Jordan’s own reputation has the school administration unwilling to believe her. That is, until she makes a startling claim – she’s not the only victim.

Suddenly, all eyes are on Melanie, and it isn’t for her amazing free-throws. A man’s job, a girl’s reputation, and her boyfriend’s entire world now rest in Melanie’s hands. She has to decide: keep her secrets and protect her future, or put an end to the lies…and lose everything.

Wow! There were a couple of times during this book that I just had to stop reading. Not because the story and its message were poorly-written…the opposite honestly. Because I was a victim when I was in high school, I found myself having to step away from it and all of the emotions it raised in me. When an author can do that, can draw me in and hit me in the heart, I am extremely grateful as it means I’m a different person when I put the book down at the end of the day.

My story isn’t exactly the same but I could relate to so many of Melanie’s thoughts, her pain, her disassociation, and the fear of telling someone what happened to her and what they will think or even believe. Be prepared for some strong feelings if you’ve experienced rape or sexual assault. She is fortunate to have a strong support system even though at times that seems that is at peril.

Jordan is the other central female character in Nets and Lies. Although her means for getting what she thinks she wants is not anywhere close to ideal, she comes out a stronger person for it. She seeks forgiveness. And there is hope for her as she learns more of who she is and what she wants.

Katie Ashley delivered a story that will be with me for a long time. I deeply appreciate her approach to Melanie’s story and how it was real and left me with hope knowing that life is a journey with small victories along the way.

Katie Ashley is the New York Times Best-Selling author of The Proposition. She lives outside of Atlanta, Georgia with her two very spoiled dogs and one outnumbered cat. She has a slight obsession with Pinterest, The Golden Girls, Shakespeare, Supernatural, Veronica Mars, Designing Women, and Scooby-Doo.