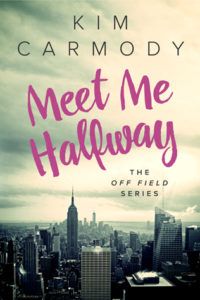 Meet Me Halfway (Off Field #2)

An ambitious journalist on a fast track to success.

A round one draft pick determined to keep his personal life his own.

And an attraction neither of them expected.

Olivia Callahan is a woman on a mission. When she lands a career defining opportunity in the male-dominated world of sports journalism, she knows it’s make or break time. Olivia’s boss has given her the green light to produce her very own documentary, and she’s not going to let anything get in the way of perfection.

After a few setbacks in college, Nate Sullivan is finally on his way to the big leagues as the newest recruit for the New York Warriors. Determined to put his somewhat colorful past behind him, Nate’s all about the straight and narrow as he sets out to prove he’s worthy of the first round draft pick that’s caused so much debate from fans and media.

The last thing Nate wants is to delve into stories from his past. But when his new team directs him to set the record straight, he has no choice but to cooperate with the feisty, determined reporter who shows up on campus. Olivia is thrilled that Nate Sullivan is her man. His colorful background is just the thing to take her story from memorable to award winning.

What neither of them expected is their attraction to one another, yet try as they might, determination gives way to temptation eventually. As Nate battles to protect his privacy and Olivia fights to produce the story of her career, they must decide what they’re willing to give up in order to gain each other.

Louisa’s 4 Star Review
I was super excited to see Kim’s newest book baby hit my kindle.  I read Lexington and 42nd back in February and have been looking forward to the 2nd book ever since!
Ms. Carmody hasn’t let me down.  For a debut book – I loved the writing in Lexington and 42nd, she has once again brought her A-game.  As it was in her debut book, she writes strong characters.  Characters in which I want to be friends with, hang out with.
Olivia – working in the male-dominated world has the opportunity to further her career with a story on Nate, the first round draft pick for the New York Warriors.  He’s such a good guy and Olivia sees that from the moment she meets him.  Their relationship begins as a business relationship, turns to friendship then so much more.  There is an age difference which often becomes a concern (mainly for Olivia), but their connection makes her (and me the reader) forget that they are in different stages of life.
Once again – Ms. Carmody has given me a book to sit and enjoy and seep into another person’s life…the reason I love to read.
Share