Malachi and I by J.J. McAvoy 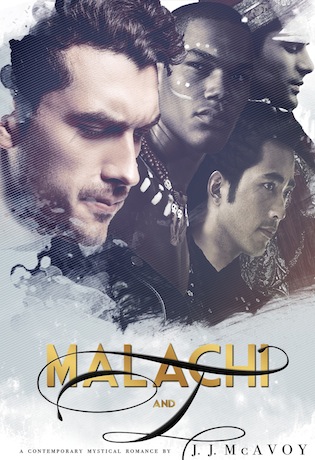 What if I told you the greatest love stories ever told—Cleopatra and Mark Antony, Salim and Anarkali, Romeo and Juliet and so many more—are far greater tragedies than anyone has ever realized?

What if I told you that you haven’t been reading a new story… just a new chapter in one epic saga?

If I told you…all of those lovers…were actually the same two souls seeking their happily ever after over and over again, would you believe me?

Would you believe them?
Born again,
Love again,
Part again,
Was their curse.

In this modern era, will they find eternal love or will they be doomed to repeat the cycle forever?

WOW….What did I just read?

JJ McAvoy has outdone herself with this mystical story.

I was captivated from the first page onward.  JJ is one of the authors I just read.  I don’t read blurbs or synopsis, I JUST READ. So I had no idea what this book was about.  As I continued to read the story slowly began to unfold.  A thousand lives, a thousand deaths and a love story with each one.

I don’t want to give you too much in the story because, like me, you deserve to watch this unfold, over and over again.

Beautiful story written by an author who has proven herself over and over again.  She has written contemporary romance, to mystical romance to my all time favorite MOB series – The Untouchables.  Her versatility is beyond anything I have seen in another author in a long time!

Malachi and I was so different than anything I would normally read. The cover and synopsis drew me in. It’s not my favorite JJ McAvoy book, but she poured her words into a world that is different. She has ventured out of her comfort zone and delivered Malachi and Ester’s story.

At first I was a bit confused, but the plot grew and flashbacks from the past helped give it understanding. I’m glad I went out of my normal reads and gave this book a try!

I hate them for no other reason than the symbolism they invoked. Throughout literature, apples have taken on the symbol of sin, the forbidden fruit, the start of chaos, the undoing of man. The most famous stories are that of Adam and Eve, a single apple caused them paradise and peace.

Snow White and the Seven Dwarfs—an apple laced with poison that caused Snow White to fall into a coma until a random man awakened her with a kiss. A happy ending, unless you knew that Snow White was Margarete von Waldeck, a sixteenth-century German countess who was banished to Brussels by her step-mother. The poison came from the King of Spain, the father of her prince, and yes, with a damn apple. But she didn’t fall sleep, she died.

Then in Greek Mythology, at the wedding of Peleus and Thetis, Eris, the Greek goddess of strife and discord, who understandably was not invited to the wedding but lacked the rational capacity to figure out why, decided to throw a golden apple onto the table at the feast to the most fairest one of all. One apple, dozens of vain goddesses, and just like that a wedding was destroyed and a war began.

If I could take every bloody apple and shoot them to the moon, I would. Maybe if I’d thought about earlier then I wouldn’t have been in my current situation—I wouldn’t have been covered in smoke, sweat, and blood. I wouldn’t have tried to save the old woman from her burning car. Burning because a chain reaction of events that began with the younger woman who was crossing the crosswalk in front of my car, and the impatient fool who ran out of the store. As he barreled into her and knocked her over her bag fell and sent a slew of apples rolling into the street. Apples her daughter then broke free of her grasp to chase after which caused the oncoming pick-up truck to swerve left and straight into the old woman’s car as she was pulling out of her parking space at Spencer’s Grocery Store.

The sight and sound of the accident startled the teen driver who was pulling up behind me, causing him to step on the accelerator instead of the brakes. As his car slammed into mine, my head snapped forward and smashed into the steering wheel as my seatbelt dug its way into my shoulder.

“Dude are you okay?!” The teen moron, screamed as he rushed from his car to mine.

Even though my vision was blurred I saw the car—a silver BMW—and the bloodied woman who lay unconscious inside of it, and without thinking I pulled off my seatbelt and ran towards the car. I felt nothing as I yanked on the door repeatedly while the smoke rose into my face. Even when she was in my arms and I was dragging her from the car I felt nothing. Nothing, until I looked around screaming for help, only to see, the now bruised and chipped and deformed but no longer rolling…a bunch of fucking apples.

J.J. McAvoy was born in Montreal, Canada and is currently studying Humanities at Carleton University. She is the oldest of three and has loved writing for years. She is inspired by everything from Shakespearean tragedies to Pop Culture. Her novel “Ruthless People”, out July 17th, hopes to push boundaries and take her readers on a ride through the dark side. Please feel free to stay in touch via Facebook, Twitter, Tumblr and youtube, where she video blogs.

Tags: J.J. McAvoyMalachi and I