LOVE AND SKATE (Love and Skate #1) 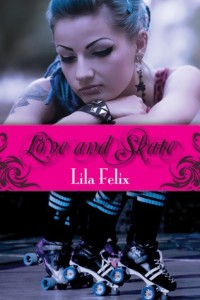 On the rink she’s tough, she’s a leader, she’s fast and she’s the epitome of a rebellious girl. But Nellie’s been hurt, only once, but it was enough to make her look at life through different eyes and off the rink she’s a timid girl who loves with no pretenses.
A long time ago Owen Black was betrayed by the girl he thought he loved and the guy he called his best friend. The anguish set off a domino effect of negativity in his life and he never has fully recovered. He meets Nellie Forrester and thinks he can let it go for her.
But how can you love someone when the wounds from your past are still wide open?

I was immediately attracted to Love and Skate by the fact that it involved roller derby girls. I always wanted to be one so a book about a derby girl and the guy that meets her has to be good! And I wasn’t disappointed. I’ll admit, it has been a bit since I’ve read a YA book and it was so refreshing and sweet to read Owen and Nellie’s story.

There was just enough heat between them to keep it exciting. It was heart-wrenching when Owen had to take off and deal with his own demons. Nellie had this amazing, spunky personality and she was just the right person to match up with Owen. I loved watching their relationship unfold, from the first time they meet through some growing pains as they dealt with issues that would either make or break them as a couple. They are also surrounded by some wonderful family and friends. Lila does a fantastic job of adding depth to those characters while still keeping the focus on Nellie and Owen. Loved this start to the series! 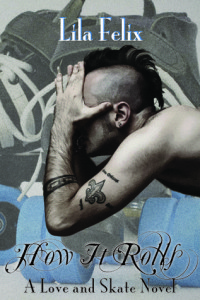 Despite the odds, Reed Wolfe is making it, by the skin of her teeth. Her dreams and aspirations will have to wait until she can get on her feet. Because right now she’s homeless and churning on a downward spiral.

Falcon Black is existing. Not living, not thriving, just jutting along a path. But when he finds Reed, he can’t resist the urge to help her, lighten her load. But Falcon tends to go overboard, over the line, crossing boundaries he never thought he would and risking her trust in the process.

Can she accept his love or will it end up smothering her?

Wow! Lila Felix ramped up her writing on this one! More derby times, a super swoon-worthy guy, and a heroine who is just someone you want to love and protect.

There’s nothing you could ever do or say that could make me not want to be around you Reed – Nothing.”

*swoon* Falcon. He’s a tattooed, pierced guy with a Mohawk. And a heart of freakin’ gold. In a business suit. Eeep! And such a gentleman. He’s the one to fix things for others and take care of others. I completely lost my heart to him. Reed, her story is a true heartbreaker. And there couldn’t be anyone better for her than Falcon. And she for him.

And I love the sweet, hot moments between Falcon and Reed. I loved how they just seemed to slide into a relationship with one another. But oh my, I swear, my heart literally broke and I was crushed at a couple of points in How It Rolls. Thankfully, there were mending points too. Lila Felix does a fantastic job of developing characters that have had some serious issues in their lives and yet, they still have the ability to overcome them. How it Rolls had a beautiful ending that left me wanting oh, so much more!

Lila Felix made the decision to write a book after being encouraged by friends. She is a stay at home mom to three wild children and three boisterous dogs. Between writing books she loves read and watch sappy 80’s movies. Favorite things: ice cream, anything purple, roller derby and any kind of music she can get her hands on. If you’re looking for her, try looking under Cypress trees in the swamps of Louisiana.