Lessons in Sin by Pam Godwin

Lessons in Sin by Pam Godwin is now live!

I need to go to confession after reading, Lessons in Sin by Pam Godwin!! Being a catholic girl, I stopped quite a few times did my cross, and asked God, to forgive me! Oh, I certainly got my Lessons in Sins with this one. Some scenes had me blushing and guilt-ridden!
The story between Father Magnus “He’s so freaking hot” Falke and Ms. Tinsley “I take no shit” Constantine is no doubt scandalous, but not as scandalous as you might think… Magnus and Tinsley were inevitable! Their all-consuming ride to heaven and hell had me salivating for more.

Bad girl Tinsley was sent off to an all-girls boarding school after doing sinful things with boys…But unbeknownst to her, her greatest sin lies waiting at Sion Academy. He’s older, strikingly good-looking, wears all black with a white collar, along with a murderous glare. Father Magnus is the devil in sheep’s clothing. With one look, he has women shaking with fear, while wetness pools in their panties!

Forgive me father for I have sinned, FATHER MAGNUS had me squirming in my seat. Hot is an understatement, but underneath all that testosterone was a tarnished soul looking for absolution…
Magnus was so unexpected! Not your typical priest. He’s had a sordid past that he’s trying to escape. 9 years ago, he joined the ministry for reasons he kept to himself. He was devoted to God until a lonely smart-mouthed 18-year old showed up at his school…
She was like nothing he’s ever encountered before! She made him want things he’s never had and calmed his savage beast within. 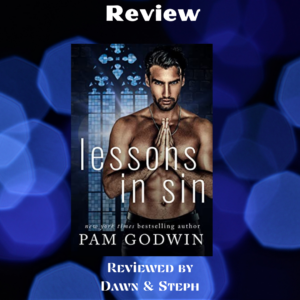 Tinsley’s life is not her own. She was a mere pawn in her mother’s game. Lonely, defiant, and too damn smart for her age. When she met Father Magnus the man scared her to death…
For more reasons than one.
Trying to seduce a priest sounded easy until that priest awakened everything inside her… He made her crave things. What starts off as a dangerous game of flirtation turns into so much more.

This is age/gap taboo romance is like nothing I have read before. From scorching hot to totally endearing. I fell hard for the Priest and his Princess.

There’s no absolution for the things I’ve done. But I found a way to control my impulses. I became a priest.

As Father Magnus Falke, I suppress my cravings. As the headteacher of a Catholic boarding school, I’m never tempted by a student. Until Tinsley Constantine. The bratty princess challenges my rules and awakens my dark nature. With each punishment I lash upon her, I want more. In my classroom, private rectory, and bent over my altar, I want all of her. One touch risks everything I stand for. My faith. My redemption. And even my life. As if that could stop me. I need her pain, and her heart, and she needs my lessons in sin.

New York Times, Wall Street Journal, and USA Today bestselling author, Pam Godwin, lives in the Midwest with her husband, their two children, and a foulmouthed parrot. When she ran away, she traveled fourteen countries across five continents, attended three universities, and married the vocalist of her favorite rock band.

Java, tobacco, and dark romance novels are her favorite indulgences, and might be considered more unhealthy than her aversion to sleeping, eating meat, and dolls with blinking eyes.