Dalton Hughes was a teen heartthrob who is now all grown up.  He’s an up and coming lawyer who is enjoying living the life of a single man. Until one phone call turns his entire existence upside down. The irony that he will turn to a woman from his past for help. A woman whose friendship he inexplicably betrayed.

Kailyn Flowers is on the partner fast track at her law firm. She’s working any and every angle to make it happen. Then the opportunity just walks into her office to make her dream a reality. Except she hates him with every fiber of her being.

Imagine crashing into the guy you’ve been majorly crushing on. Literally, knocking him to the ground on campus in full view of all his friends. Did I mention, said crush is also a major tv star? Not a great beginning and yet they form this flirty friendship all through college. They each go their separate ways until a tragedy brings them back together.  Daxon’s parents are killed in a car accident so now he’s got custody of his little sister.  Not only is he devastated – he’s completely overwhelmed by his new normal.

Kailyn has to help Damon navigate these strange new waters as best she can. Her boss wants Kailyn to use the situation to lure Dixon to her firm.  If she does it – then she’ll be partner.  How is she supposed to share space with him when she despises him? Except, as a woman, she finds herself irresistibly attracted to her nemesis.  As a human being, her heart is moved by his circumstances. So what the hell is she going to do?  Dax is feeling the same way too.  He’s learning that what he thought was important is rapidly changing.  The pull between them cannot be denied and soon enough they are acting on those feelings.

Helena Huntings gives us the full Monty in Meet Cute. She brings the cute, the funny, the angst and the sexy in equal parts here.  HEA? Not so fast. Kailyn is not being honest with herself or Dax. He, in turn, has built up walls to protect himself, his heart and his sister.  Can these two see past their differences? Find out for yourself in this charming read. 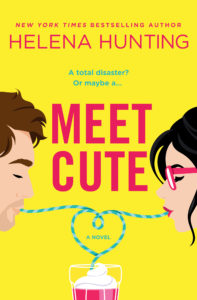 Add it to Goodreads →  http://bit.ly/GRMeetCute 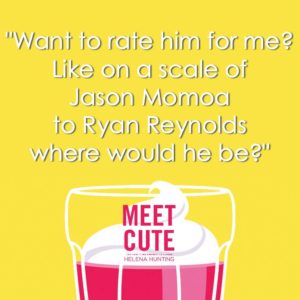 The New York Times bestselling author of Pucked and The Good Luck Charm delivers a Hollywood happily-ever-after where a famous heartthrob falls for his ultimate fangirl in this sexy standalone romantic comedy.

Talk about an embarrassing introduction. On her first day of law school, Kailyn ran – quite literally – into the actor she crushed on as a teenager, ending with him sprawled on top of her. Mortified to discover the Daxton Hughes was also a student in her class, her embarrassment over their meet-cute quickly turned into a friendship she never expected. Of course, she never saw his betrayal coming either…

Now, eight years later, Dax is in her office asking for legal advice. Despite her anger, Kailyn can’t help feeling sorry for the devastated man who just became sole guardian to his thirteen-year-old sister. But when her boss gets wind of Kailyn’s new celebrity client, there’s even more at stake than Dax’s custody issues: if she gets Dax to work at their firm, she’ll be promoted to partner.

The more time Kailyn spends with Dax and his sister, the more she starts to feel like a family, and the more she realizes the chemistry they had all those years ago is as fresh as ever. But will they be able to forgive the mistakes of the past, or will one betrayal lead to another? NYT and USA Today Bestselling author, Helena Hunting lives outside of Toronto with her amazing family and her two awesome cats, who think the best place to sleep is her keyboard. Helena writes everything from contemporary romance with all the feels to romantic comedies that will have you laughing until you cry.