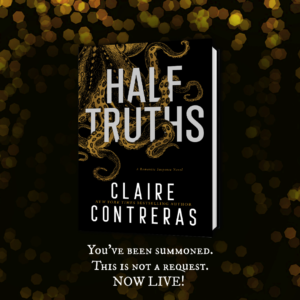 Amelia “you can call me Mae” Baston is the only daughter of a very wealthy and powerful man.  After a breakup with her longtime boyfriend, she transfers to her brother’s college to finish her degree.  She literally bumps into Ellis University’s star hockey player – Logan Fitzgerald.  He acts like a jerk, of course, but she is totally intrigued by him.

Logan Moriarty Fitzgerald is such an enigma.  One minute he’s dismissive and broody and next minute he’s sweet and enigmatic.  Is he a good guy?  Is he a bad guy?  He could be part of a secret society that is responsible for some shady goings-on.

One day an envelope with a card saying you’ve been summoned is at Mae’s doorstep.  An invitation to a world that she does not understand.  Things are about to get deep and dark really fast.  Her brother’s condition is precarious, a girl is missing and she can’t stop her growing feelings for her broody neighbor.  Mae has a lot of questions.  The only way to get her answers is to become one of them.  Play the game despite the risks.

Half-Truths did not draw me in right away.  The first few paragraphs felt slow to me and THEN boys and girls it took off and I was all in!  Claire Contreras is a master of the unexpected twist and here is no exception.  She’s written this story in a way that has definite menace and darkness hanging over it so that it reminds me of the current Riverdale reboot.  It’s all very cloak and dagger with a nice dose of romance and steam, will compulsively keep you turning page after page until you’re done.

And THEN you’ll want more – I do.  Half Truths is the kind of book that you don’t want to know too much about because it adds to the enjoyment.  My review will stay deliberately vague.

I’ve read every book written by Claire Contreras and it is so great that she is back in the genre where I first discovered her.  Bring on Book #2, Claire!

by
Claire Contreras
You’ve heard of these groups – the secretive ones that only the crème de la crème are invited into, the ones outsiders speculate about for centuries – I’m the second in my family invited to attend, but to them, I’m fresh meat. New blood. New money, too.

They think they’ll elbow past me, that I’m here for their amusement, for them to walk all over, they’ll find out soon enough that I’m not.

I may look like one of them, with my designer bags and clothes straight from the Parisian runways, but I’m not. I’m here for answers, to take revenge for blood spilled on their centuries-old Persian rugs.

I transferred here in search for answers about what happened to my older brother, who hightailed out of here, and my friend who seemingly disappeared into thin air. I certainly wasn’t here for the attention of the star hockey player, regardless of how much he willed my eyes his way. I wasn’t here for his scrutiny or his judgment or to read into his mysterious aura. I was here for the society, because only they held the answers I needed. That was, until I found out that in order to get those answers, I needed to to go through him. He’s saying if I want in, I have to play by their rules, follow their lead.

I may be the second person I know of to be invited into their society, but I’ll be the first to make it out intact. 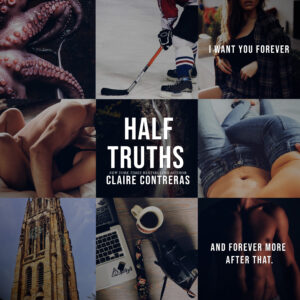