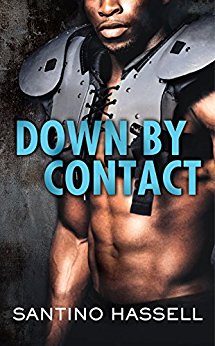 Two rival football players begin a game with higher stakes than the Super Bowl in this steamy romance from the author of Illegal Contact.

Simeon Boudreaux, the New York Barons’ golden-armed quarterback, is blessed with irresistible New Orleans charm and a face to melt your mama’s heart. He’s universally adored by fans and the media. Coming out as gay in solidarity with his teammate hasn’t harmed his reputation in the least—except for some social media taunting from rival linebacker Adrián Bravo.

Though they were once teammates, Adrián views Simeon as a traitor and the number-one name on the New Jersey Predators’ shit list. When animosity between the two NFL players reaches a boiling point on the field, culminating in a dirty fist fight, they’re both benched for six games and sentenced to joint community service teaching sullen, Brooklyn teens how to play ball.

At first, they can barely stand to be in the same room, but running the camp forces them to shape up. With no choice but to work together, Simeon realizes Adrián is more than his alpha-jerk persona, and Adrián begins to question why he’s always had such strong feelings for the gorgeous QB…

Dawn’s 5 Blush Up All Night Review

Santino Hassell made me fall in love once again with Down by Contact. I am honestly loving this series. It just resonates with me. Probably because all the guys are so natural and believable. Santino has a gift with dialogue and chemistry. Throughout his books you will find legitimate conversations between the characters. Nothing feels forced… Especially the guys connections. Wooza!

Down by Contact was spicy and sweet! Two rival football players, Simeon Boudreaux from the New York Barons and Adrian BRAVO from the New Jersey Predators. Talking trash and acting out has them in hot water…. When they are forced to work together that’s when the magic begins! I fell in love with these two for very different reasons… Simeon is a charmer and just an innately good person. He has a huge heart, a pretty face and the body of a God. When I met him in Illegal Contact, I was so intrigued and excited when I heard he was getting his own book… Down by Contact is the second in the series, but all the books can be read as complete standalones.

Adrian Bravo is a loud mouth, bad boy, but he is also misunderstood. His rivalry with Simeon and his jerk attitude didn’t stop me from getting feels for him too. This boy knows how to redeem himself. He had me smiling! Once I saw what was on his inside…. I was all for this relationship. Simeon was so patient and forgiving with Adrian. While Adrian was ultimatley protective and loyal to Simeon. I love how their relationship progressed… slowly… by building trust and communicating. This is perfect enemies to lovers story! I was so addicted to this book, I snuck off on Christmas day to finish it. Sweet, sexy, fun and sensual. Who could ask for more??

I can not wait to see what Santino does next!

Tags: Down by ContactSantino Hassell