Interview with the Girls from FRIEND-ZONED by Belle Aurora 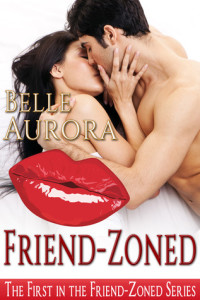 Dawn here from Up All Night Book Blog! I had such a fantastic time meeting the girls from Friend-Zoned and I am excited to share my interview with you! Enjoy!!

Dawn: Hey girls! Thanks for letting me join you at the White Rabbit and chat with you all! I love to dance! Maybe we can hit the dance floor after we chat?
Lola grins big, “Hell Yeah! Me and you, sister. I love to groove.”

Tina, Mimi and Nat all groan and roll their eyes.

Mimi sniggers and nudges Nat’s shoulder with hers in a good one gesture.

Tina shoots a warning glance at Nat then smiles sweetly, “I’d love to dance with you, Dawn.”

Tina, I’ve been dying to try one of your cookies or cupcakes! PLEASE tell me you brought some…please!?

Tina blushes and dips her head. She hesitates before confessing in a rush, “I baked a batch this morning. I hope you like Chocolate with fudge ganache.” Tina produces a Tupperware container from behind the sofa and opens it to reveal twelve of the most delicious cupcakes you’ve ever seen. They’re perfectly iced and look so moist that Nat’s eyes glaze over as she licks her lips. Tina spots Nat and points a finger at her in warning, she whispers loudly, “We spoke about this. No.”  Dawn is drooling and swooning over them

Nat whispers, “She won’t miss one.”

Tina whispers back, “I know she won’t miss one. But it’s rude. I baked these for Dawn.”

Nat looks at Dawn and asks “Do you think I could have one of those?” She doesn’t wait for a reply before she snatches one out of the container, quickly unwraps it and shoves the whole thing in her mouth, chewing loudly and moaning. With a full mouth, she leans her head on Tina’s shoulder and says a garbled, “I love you, T.” Tina pats Nat’s cheek and smiles at Dawn. She mouths sorry.

No problem! The rest are for me, right? *grinning at Natalie*

All right, how about we start with some easy questions…

We’re here in the White Rabbit and it is FREAKIN fabulous! And to have your own VIP table. Hell yeah! Did you have any expectations of what it was like before you were in here the first time?

Mimi starts, “I’d been here before. I hadn’t told the girls that but I used to come here with an old boyfriend.” She smirks, “I knew how great this place was, that’s why I didn’t give Tina a choice in coming. I knew she’d love it. I knew we’d all come here again.”

Lola nods in agreement and answers wide eyed, “I was so freakin’ amazed. Who knew a place like this was hiding in this building.” She scrunches her nose. “You’d never tell from the shabby outside.”

Nat rolls her eyes and whispers in a daze, “Those cupcakes. Mmmmm.”

Tina smiles and answers, “I had zero expectations but I have to tell you, whatever my expectations were…what I saw that first night exceeded them without a doubt. I love this place.” She looks to her friends and says softly, “It’s a haven for us.”

The girls nod their agreement.

Do you all still get together for poker or movie night?

All the girls smile and says together, “Yes!”

Tina shakes her head softly and chuckles, “But it’s movie and board game night now. The whole Tina-Doesn’t-Know-Poker thing was getting to Nik. He hated that I was left out.” Tina looks to the floor, her face becomes blissfully happy.

Tina frowns. Mimi almost chuckles but quickly turns it into a cough. Lola bites her lips to stop herself from laughing.

I love how you are all such great friends! I know Tina and Nat have been friends for a long time. Lola…Mimi…was it friends at first sight? *laughs*

Mimi answers “No” at the same time Lola excitedly answers “Yes.” The two look at each other and smirk.

Mimi leans forward and quietly clarifies, “When I came to Tina for the job at Safira’s, I had a huge chip on my shoulder. Tina helped me when no one else would. She gave me a chance and I’ll forever be grateful. It took a while but she’s more than just a friend to me.”

Lola speaks up, “Tina and I hit it off right away.” She looks over to the end of the Sofa where Tina sits and says, “I knew she would be like a sister to me. I say it straight away. She’s my mom, sister, coach, inspiration and best friend.”

Nat leans back in her chair and states, “We’re a family.”

Tell me about working together at Safira. What do you like best about working with friends? Any different now that the ownership is out in the open?

Lola responds, “Well, no. Tina had no idea Mimi and I knew she was the big boss lady and she treated us so well that even if she did tell us straight up, I don’t think it would’ve made a difference to us.” She turns to Mimi and nods.

Mimi nods her approval, “With Tina, what you see is what you get. No hidden agendas. Just a whole bunch of sweet.”

Nat puts her arms behind her head and smiles, “I hate working with these bitches.”

Nat nods and chuckles, “I do.” Nat looks at Dawn and asks, “Do you have any idea what it’s like working with three other woman and to have your periods sync?! It’s a fucking nightmare.”

Tina, Mimi and Lola burst into laughter. They laugh so hard they can’t breathe.

Nat continues, “I have a condition that prevents me from getting my period regularly so I have to listen to these crazy ladies all day long with the stupid questions and statements. Do I look fat in this? I want a cookie! Is it unprofessional to eat ice-cream out of the tub at work?”

Oh my gosh, I can just imagine!

Let’s change it up…Holy hotness, ladies, you have some serious eye candy that you are hanging out with lately! What is one word or sentence you’d use to describe each of the guys? Don’t worry, I won’t tell them what you say. Who wants to start?

Nat immediately curls her lip and states, “Ghost is not cold.”

Mimi retorts, “The man is so cold he leaves a trail of icicles when he walks, babe.”

Tina smiles a beautiful smile and states, “I couldn’t use one word or sentence to describe those guys. There is so much more to them than one word or sentence and I don’t think I’d do them justice.” She puts on a cheeky grin and says, “If they were songs, Trick would be Girls just wanna have fun by Cyndi Lauper. Max would be What doesn’t kill you makes you stronger by Kelly Clarkson. Ghost would be Scar tissue by Red Hot Chili Peppers.” She looks into the distance and says softly, “My Niki. He would be At last by Etta James.”

Do any of the guys just drive you crazy, like deranged, I want to kick something, crazy?

Nat slaps her hands on her thighs and screams, “YES! Max wont stop trying to sleep with me!”

Lola also raises her hand, “With me too.”

Tina raises both hands, “Yeah, Max tries to convert me over to what he calls the dark side all the time.” She chuckles, “He’s a horndog but we love him.”

All the girls smile fondly and nod in agreement.

Most embarrassing moment for you? (And feel free to help the others answer!)

Mimi scoffs, “I never get embarrassed.”

Tina raises her hand slightly and says quietly, “That’s not true, Meems. Remember when that guy came into the store looking for lingerie and you offered to try it on for him so he could get a better idea on what it looked like on but he refused like a thousand times and…”

Mimi glares at Tina, flushes and cuts her off with “I didn’t know it was an anniversary gift and he was hot!”

Tina laughs and says “That was hilarious!”

Lola answers “I walked in on my parents doing it.”

Tina smiles, “There’s nothing wrong with that.”

Nat states “I could name one of the many tumbles I’ve taken in this very club. I trip over something at least once a day. I’m a walking embarrassment waiting to happen.”

Tina admits “I’m just like you, hon. Walking embarrassment. Just yesterday I walked out of the house with the back of my skirt tucked into my panties and didn’t realise til an old lady saw me walking to the store with my butt out.” Tina looks at Dawn and states “She was a nice old lady.”

What’s one funny thing you could share about yourself or one of the other girls?

Lola chuckles “Tina talks to herself when doing inventory.”

What’s the sexiest part of a man?

Mimi licks her lips, “His mouth.”

Nat admits “His ability to make me lose control.”

What is your dream date?

Nat responds “I don’t care about dating. For me its about connection and chemistry.”

Mimi nods in approval and answers “I’m the same. I don’t care much for dating. I do like sex, however. With either team.”

Tina smiles through her response, “Nik’s already done all that. Dress, dinner and love. All my favourite things.”

Lola says “Anywhere he is. You know? Him. The one.”

Most public place to have sex? Yes, I just went there!

All the girls answer at the same time. “The club.”
They all look at each other and laugh.

Tattoos or no tattoos?

Tina answers immediately, “Hell yeah, baby. I love body art. Especially on Nik’s body. That man has a work of art hidden under that business attire.”

Nat scrunches her brow and responds “Yes and no. On the right man, it’s hot. On a poser, it’s not.”

Lola nods and says “I’m for it. I love Trick’s tatts.”

Mimi admits “I’m with Nat on this. Yes and no. But for the most part, yes. I love women with tattoos. That is hot.”

I’ve had such a great time chatting with you four! Thank you SO much for taking time to meet with me! I can’t wait to share this with our fans at Up All Night Book Blog!

Tina speaks up, “Thank you for having us, Dawn. We appreciate your time to do this, we’re flattered. Now quickly enjoy a cupcake before we head out to the dance floor, doll!”

And that concludes my interview with the girls from Friend-Zoned! They were such a fun group and I now know where I’ll be dancing when I visit the girls!  ~D.

For more on Friend-Zoned, check out my review here