Hold On, by Kristen Ashley Narrated by Erin Bennett 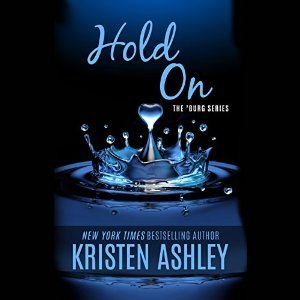 In love for years with last bastion of the ’Burg’s eligible bachelors, Garrett Merrick, Cher worked hard at making him laugh. Being one of the guys. Having him in her life the only way she could. All this knowing he was in love with another woman.

The Merrick Family is known for loving deep. So when Cecelia Merrick was murdered, it marked the Merrick family in a way none of them recovered. Both Cecelia’s children found love. Both turned their backs on it. But Garrett “Merry” Merrick knew in his soul the woman he divorced years ago was the one for him.

Until the night when Cher took Garrett’s back and things changed. The Merrick family loves deep but they also protect fiercely. And with his eyes finally open, he can see the woman who truly is for him and Garrett goes after her. The problem is she’s surrounded by danger. So he has to win her at the same time keep her safe.

This is the audio review for Hold On. Audio’s can be a completely different experience than reading. This is one where I felt that to be true. It’s one thing to read a curse word, but for some reason it felt like every other word I was hearing was F**k. Hell, don’t get me wrong I normally have no problem with this, but hearing it over and over again put me on edge after a while. So much so I felt myself cringing. I would not be surprised if 10,000 words in this book are the F bomb.

I liked her son Ethan too. He really got to stand up for his mom.

Garret was enjoyable, but I lacked the wow.

Would I recommend a credit?