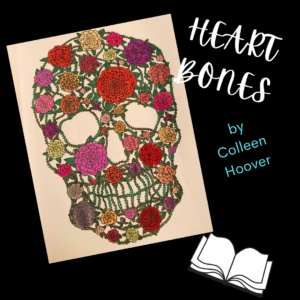 Once again, Colleen Hoover starts off with a chapter that pulls you in and never let’s go. This was a classic Colleen Hoove binge-read.  In less than 24 hours and I devoured this book.

Colleen Hoover is such a skilled writer and storyteller.  She always gives us characters that we learn to love and love to learn about.  Beyah and Samson are no different.  Two characters that are opposites from the outside, but as the layers peel away we so so many similarities.

Of course, there are some twists and turns but that’s what makes any book interesting.  Colleen Hoover has the ability to write books that leave you smiling and leave you a better person, and this book is exactly that.    The growth of these characters over the course of the book makes you smile like a loon once you finished.   Leaves your heart happy. 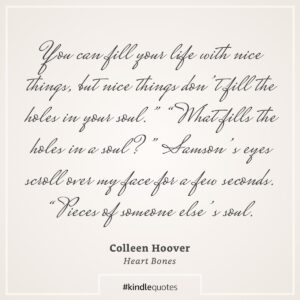 Life and a dismal last name are the only two things Beyah Grim’s parents ever gave her. After carving her path all on her own, Beyah is well on her way to bigger and better things, thanks to no one but herself.
With only two short months separating her from the future she’s built and the past she desperately wants to leave behind, an unexpected death leaves Beyah with no place to go during the interim. Forced to reach out to her last resort, Beyah has to spend the remainder of her summer on a peninsula in Texas with a father she barely knows. Beyah’s plan is to keep her head down and let the summer slip by seamlessly, but her new neighbor Samson throws a wrench in that plan.
Samson and Beyah have nothing in common on the surface.
She comes from a life of poverty and neglect; he comes from a family of wealth and privilege. But one thing they do have in common is that they’re both drawn to sad things. Which means they’re drawn to each other. With an almost immediate connection too intense for them to continue denying, Beyah and Samson agree to stay in the shallow end of a summer fling. What Beyah doesn’t realize is that a rip current is coming, and it’s about to drag her heart out to sea.