Hard to Love by Kendall Ryan 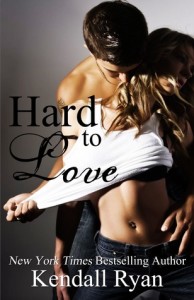 Cade takes cares of his sick younger sister by doing what he does best–cage fighting and starring in adult movies, his newest harebrained moneymaking scheme designed to pay for his sister’s growing medical bills. But when his latest gig finds him admitted to the ER sporting an erection from hell, thanks to the little pill given to him by the director, he can’t get the pretty little nurse who treated him out of his head, even though he knows she’s so far out of his league it should be illegal.

“He was right that I did want it, but I wasn’t about to tell him that. His cockiness was now really beginning to get on my nerves. ‘Get over yourself. It’ll be a cold day in hell when I come asking you for sex.’ “

In Hard to Love, Alexa is this determined, feisty, and self-assured (for the most part) woman who knows what she wants and doesn’t take crap from anyone, including Cade. She also has this vulnerable side to her that surfaced. She never came across as weak and that was refreshing. I was cheering for her and crying with her!

And then there’s Cade, packing a python in his pants and a heart of gold. He does make some choices that made me want to smack him and say ‘find another way!’ At the same time, I hurt for him when he felt the choices were his only options. It certainly wasn’t hard to love Cade when there was much to about him, including his caring for and selflessness toward his little sister, Lily.

Cade & Cupcake – a hot, sexy, and fun love story. Kendall Ryan had me wrapped up in her characters’ lives and emotions right away. Another great read!

About Kendall Ryan (from Goodreads)