Games of the Heart audio written by Kristen Ashley, narrated by Rachel Fulginiti

From the balcony of his house, Mike Haines can see the quiet, commonplace beauty of the Holliday farm. But what he remembers is the little sister of his high school girlfriend, Dusty who grew up there. As a teen, Dusty had gone off the rails but when she was a kid, she was sweet, she was funny and she had a special bond with Mike. But after high school, she took off and Mike never saw her again.

Then tragedy strikes Dusty’s family, she comes back into town and Mike thinks she hasn’t changed back to the sweet, funny girl he knew but instead continued to be selfish and thoughtless, leaving her family alone to deal with their mourning. So he seeks her out and confronts her in an effort to understand what went wrong and to force her to sort herself out.

He finds out quickly he’s wrong about Dusty Holliday. Very wrong. And right after Mike discovers that, the bond they had years before snaps back into place in ways he would never suspect.

But Mike Haines had a bad marriage then he played games of the heart for a good woman. And lost. In order to protect himself and his kids, he’s cautious, he’s careful to read the signs and he’s not interested in finding a woman he has to fix.

Then he learns what happened to Dusty and he thinks she needs to be fixed. He swings, he misses and in this new game of hearts, for Dusty, Mike just got strike three

I listened to Kristen Ashley’s At Peace and absolutely loved it. We got to know Mike Haines in that story where he was a good guy and liked Vi, but was not the right guy for her. And in At Peace we also learned that Mike loved the farm next door. He bought a house overlooking it. We just didn’t know yet that the reason he loved it so was for Dusty Holiday.

The two are straight shooters and waste no time getting reacquainted. I enjoyed this about the two of them.

The Burg Series is a slow build series. It’s more about the journey than one specific thing happening to the couple and you really feel like you get to watch them grow. For me, personally I need the pace to move a tad faster, but that is just this series feel.

We also got a bonus love story here between Reece Haines and Finn Holiday. This was sweet. Kristen Ashley doesn’t write YA but this sure had a flare of it and I enjoyed the young love story in addition to Mike Haines and Dusty Holiday.

Because I enjoyed this story but needed to feel like more was happening I would give the story a three.

So that’s where I get my 3.75. Is this worth an audible credit? Absolutely. I think it’s the type of story you can put down and pick up because Kristen Ashley sure writes lovely romance that can make you feel good despite my reader preference on pace. 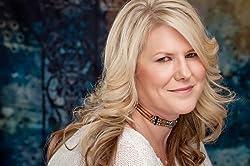 Kristen Ashley was born in Gary, Indiana, USA and nearly killed her mother and herself making it into the world, seeing as she had the umbilical cord wrapped around her neck (already attempting to accessorise and she hadn’t taken her first breath!). Her mother said they took Kristen away, put her Mom back in her room, her mother looked out the window, and Gary was on fire (Dr. King had been assassinated four days before). Kristen’s Mom remembered thinking it was the end of the world. Quite the dramatic beginning.Nothing’s changed.Kristen grew up in Brownsburg, Indiana and has lived in Denver, Colorado and the West Country of England. Thus, she’s blessed to have friends and family around the globe. Her family was (is) loopy (to say the least) but loopy is good when you want to write. They all lived together on a very small farm in a small farm town in the heartland. She grew up with Glenn Miller, The Everly Brothers, REO Speedwagon and Whitesnake (and the wardrobes that matched).