Flat Out Love by Jessica Park 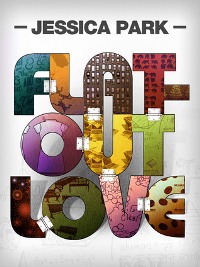 He was tall, at least six feet, with dirty blond hair that hung over his eyes. His T-shirt read Nietzsche Is My Homeboy.

So, that was Matt.  Who Julie Seagle likes. A lot.  But there is also Finn.  Who she flat out loves.

But really, how was this freshly-minted Boston transplant and newbie college freshman supposed to know that she would end up living with the family of an old friend of her mother’s? This was all supposed to be temporary.  Julie wasn’t supposed to be important to the Watkins family, or to fall in love with one of the brothers.  Especially the one she’s never quite met. But what does that really matter?  Finn gets her, like no one ever has before. They have connection.

But here’s the thing about love, in all its twisty, bumpy permutations—it always throws you a few curves.  And no one ever escapes unscathed.

New York Times best-selling author Jessica Park mines the territory of love’s growing pains with wit, sharp insights, and a discernible heat and heartbeat. Her previous novels include Relatively Famous, and she authored the e-shorts What the Kid Says (Parts 1 and 2) and Facebooking Rick Springfield.Visit her on the web at www.jessicapark.me

Wow!  Oh My God!  I didn’t see that coming!  This is how I am left feeling after finishing this book.

So I have known forever that I wanted to read this book.  I had it on my laptop to read because its only offered through Amazon.  I read on a nook so I had been putting off reading this just because it was not going to be as convenient for me to read.  Well yesterday was the day that I was going to suck it up and read on my computer.  It was so worth it!

First any assumptions I had about this story were completely wrong.  Nothing about this was what I thought it was going to be.  The characters are quirky, unique and damaged.  This book is not a sexual book and could easily be read by any age.

Part of me is still at a loss for words as to how to describe the greatness of this book.  I don’t want to give anything away.  Even the meaning of the title was a complete shock to me.  There was a huge twist in this story and I did not figure it out until seconds before the author revealed it and then it was a wave of emotion and the next eight percent of the book my jaw hung slightly open.

If you need to read something that is well written yet not like anything else then this is the story that you should read.