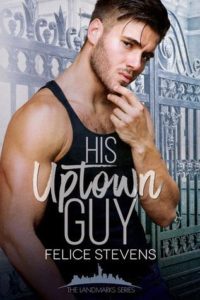 Felice Stevens continues to blow me away! I have always been a huge fan, but her writing seems to get better and better with each book. All of her books are unique, vivid and totally in depth…

This one is about a rich uptown guy with agoraphobia, who collects precious stones and a poor Albanian porter from the Bronx, who is a college student. See what I mean? Felice puts unlikely people together and they just work… beautifully! She researches everything and gives us multiple facts…

In His Uptown Guy, I learned about the fabulous Dakota Building, various precious stones, and delicious Albanian food! It was all fascinating and contributed so much to the storyline. His Uptown Guy was pure romance with minimal angst. It was soooo freaking sweet, it made my teeth ache! A story about hope, strength and the power of love…

Jesse Grace-Martin and Dash Sadiko were wonderfully complex characters. The type of characters that will stay with you long after you finish the book. Both were flawed but perfect for each other. Poor Jesse… my heart broke for him. He may be a trust fund baby and seem to have everything, but after some tragic events, his mind has made him a prisoner in his own home. He so badly wanted his life back. The day he finally decides to help himself, he meets Dash. This encounter is the catalyst to a beautiful friendship…

Dash has his own demons. He’s insecure about his background and where he’s from. He doesn’t feel good enough. His pride and stubbornness often get in his way. With patience and compassion, both guys brought out the best in each other. While they encouraged and supported one another. I loved how their relationship transformed and bloomed into something worth fighting for… Overcoming their fears together!

I loved these boys so much. I couldn’t get enough of them. Besides their sweetness, they had some pretty steamy scenes too. All the supporting characters were just as wonderful. Miranda and Mrs. Sadiko made me smile throughout! I just loved everything about His Uptown Guy! I hope Felice eventually gives us more of Jesse and Dash. I have such a craving for Baklava now!

When Jesse Grace-Martin loses his father on 9/11, his charmed life is gone forever. People look menacing, and the streets no longer seem safe. After experiencing a brutal mugging, Jesse retreats to his apartment in the landmark Dakota building. Five years later, his first attempt to walk outside those famous gates again is a disaster—except for meeting the gorgeous maintenance worker who helps him through his crushing panic attack. Jesse can’t stop thinking about the guy but hesitates to reach out, knowing he has little to offer.

Dashamir Sadiko has big dreams. Money in the bank tops his list, and his glimpse into the life of the uber-wealthy at his job at the Dakota is all the incentive he needs. Struggling to work full-time and go to college, Dash desperately wants to break the cycle of poverty his parents had hoped to leave behind in Albania. When the two men become friends, Dash isn’t sure what to expect but can’t help his growing attraction to sweet and sexy Jesse. It’s nice to see how the other side lives, but his affections can’t be bought; Dash wants to be his own man.

Defying the Dakota’s co-op rules, the two share lunches, their hopes and dreams, and ultimately their hearts. Jesse slowly regains his courage, but he’s worried he’ll never be the person he once was and that he’s not good enough for Dash. And Dash isn’t convinced the son of poor immigrants has a place at the table with a blue-blood, trust-fund man. Jesse needs to realize that money can’t buy happiness and love, while Dash must learn to trust that what they have is real, that he’s more than Jesse’s walk on the wild side with an uptown guy.

have always been a romantic at heart. I believe that while life is tough, there is always a happy ending around the corner, My characters have to work for it, however. Like life in NYC, nothing comes easy and that includes love, but getting there is oh so fun and oh so sexy.

I live in New York City with my husband and two children. My day begins with a lot of caffeine and ends with a glass (or two of red wine). I practice law but daydream of a time when I can sit by a beach somewhere and write beautiful stories of men falling in love. Although there are bound to be a few bumps along the way, a Happily Ever After is always guaranteed.