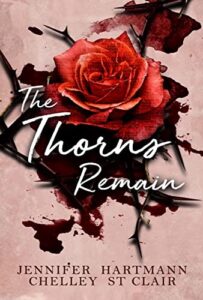 Jennifer Hartmann is writing some of the most amazing stories! The Thorns Remain is brilliant! An emotional roller-coaster filled with unexpected twists and turns. It will leave you sighing in relief when it ends. It was certainly a “full body” experience. I was shaking at times as I yelled “No!” and “Holy crap!”

Let’s talk about Evan Hart. Such a complex and emotionally driven man. I loved all of him, especially his flaws. Revenge became his lifeline. Evan became jaded and consumed after his wife cheated on him. I loved how we were able to see his thought process of his endless plans and schemes. He is two sides of a unique coin. A tender, loving, compassionate father and an insane, angry, consumed, scorned man.

And Josie. Josie Bennett, wife of his arch-nemesis. I don’t know what I loved more – her or her with Evan. She too is beautifully written. Josie is a picture of elegance, kindness, silly and sweet. Evan is captivated by this amazing woman. She is not at all what he was expecting. I loved the interaction with their kids, Summer and Olivia.

She’s a contradiction. An anomaly.

We are treated to a little glimpse of characters from her previous book – Lotus (which I HIGHLY recommend).

The Thorns Remain is truly exceptional. Jennifer Hartmann is my new Colleen Hoover! If she writes it, I will read it!

So many feelings. So many emotions.
betrayal, rage, vengeance, violence, hate… 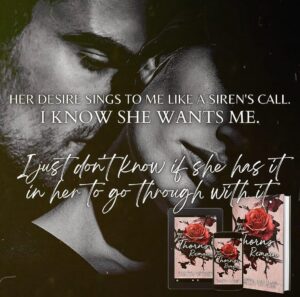 VENGEANCE.
Hiding deep within the shadows of human nature, it smolders…
Simmers…
Waits.
Only, for me, it was no longer a hibernating beast.
The day I discovered the wrongs committed against me, vengeance clawed its way right through me. The beast had emerged from its lair with a burning need to destroy the man who tore my marriage apart.
And now?
Now, it was my lifeline.
My dark lover.
My. Whole. Purpose.

REVENGE.
They say it’s sweet in the end, and I believed them. I could almost taste that honey on my tongue, like a balm I needed to quell the bitterness.
But it was all a lie.
I was blindsided.
And not once did I think about who I might hurt along the way. I never considered the casualties that may fall across my path of destruction.
No…
Revenge is not sweet. Retaliation does not end in reward.
Vengeance is not justice.
The promises whispered by that beast within?
They’re all hollow.
All it ever wanted was to be set free.
In the end, I never expected things to be worse than when it all began.
I never expected the wreckage left in my wake.

I
never
expected
her. 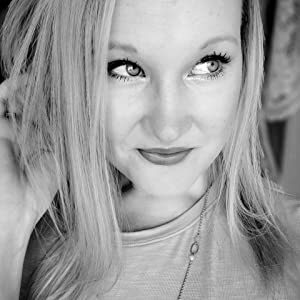 Jennifer Hartmann resides in northern Illinois with her devoted husband, Jake, and three children, Willow, Liam, and Violet. When she is not writing angsty love stories, she is likely thinking about writing them. She enjoys sunsets (because mornings are hard), bike riding, traveling anywhere out of Illinois, binging Buffy the Vampire Slayer reruns, and that time of day when coffee gets replaced by wine. Jennifer is a wedding photographer with her husband and an avid skincare junkie. She is excellent at making puns and finding inappropriate humor in mundane situations. She loves tacos. She also really, really wants to pet your dog. Xoxo.

In real life, she is a chronic daydreamer living in Tennessee with her husband and son, who patiently make sure she isn’t lost or falling over anything while her head is in the clouds.