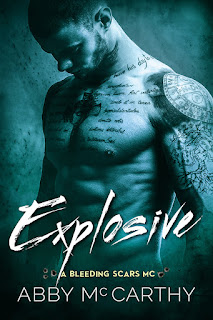 There’s
been one truth in my life-one thing that I’ve always known. My body is not my
own. I’m a bargaining chip, used by my family’s business to seal a deal or
impress a client. I’ve never had a real family, no mother to wipe my tears.
Sure, I have a sperm donor, but he’s only seen me a handful of times and not a
single time was he fatherly. One day, he shows up and offers me a gift, my
freedom for informing on my brother. I had no clue I even had a brother. I want
to know him, but the idea of freedom is something I’ve longed for.

As a former Marine, going into a hostile situation and retrieving a target was a
specialty I excelled at until I was captured and held as a POW, cutting my
military career short. Adjusting as a civilian was difficult until I met my
“brothers” and we formed The Bleeding Scars MC. When my VP, Gunner, discovers
he has a sister, I know it has to be me that saves her. Not only do I need to
rescue her for Gunner, but once I see her picture and learn how she’s been
locked up most of her life, I can relate to the lost look in her eyes. Rescuing
Alejandra is the hardest mission I’ve ever had to accomplish.

No war has ever been won alone. The battles we face will be more than a little
difficult, they’ll be explosive. Once the dust has settled and the war is finally
over, I know deep in my soul, that it will all be worth it. 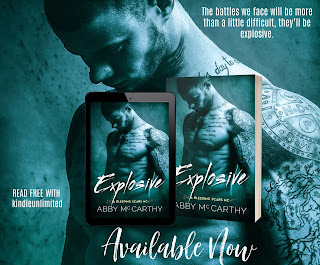 Grab Cut Wide Open on sale for 99 cents, the first standalone in the Bleeding Scars MC! Check out our 5 star reviews of Cut Wide Open.

Wow…this book is action-packed and an exhilarating read!
Ace and Alejandra (Alex’s) story has been a long time coming! I am so exciting it’s finally here.  Abby McCarthy has given her all with this book.
From the first page to the last – this book had me on the edge of my seat. Ace is Gunner’s (from Cut Wide Open) right-hand man and Alex is Gunner’s sister.  And at the end of Cut Wide Open, we learned of Alex’s existence. Gunner NEEDS to get his sister back and Ace is just the man to do it.
Ace’s ability to find his way to Alex is amazing, he’s a man on a mission to find her.  From the moment their eyes meet, even with the overwhelming threat to both their lives – there is a connection. Their connection is deep and more than just physical.  These two, unbeknownst to each other have so many similarities and I believe that was the pulling force between these two.
Not only is this a slow burn but we see these two have a connection, from friendship to a deep love connection.   With Abby McCarthy’s beautiful writing, you watch this unfold in the midst of chaos, explosions and bad guys!
Read for Free with Kindle Unlimited
Amazon:

Check out this sample of Explosive!

The sun was beginning to set, and the sky had started to turn. I
returned to where Alejandra was still sitting in that contemplative way,
absently staring out at nothing.

I sat behind her with one leg on each side of her. It was
intimate, more so than I deserved, more so than I should’ve taken. We’d shared
two kisses—one she took because she was proving something to herself and the
other I took because I was proving something to her. Who was I kidding? I was
scared out of my mind that something could’ve happened to her because she
didn’t listen to me by staying put, so I had no other choice than to kiss her.
I wanted—no; I needed to feel her lips against mine. It was either that or turn
her around and spank her. She should’ve done what I told her. There’s no way
she should ever put her life in jeopardy for me. If something had happened to
her… No, I couldn’t go there.

“Where are you?” I whispered to her, hoping to pull
her thoughts out of whatever darkness they seemed to be stuck in.

She sat motionlessly and eventually let her head fall against my
shoulder. I couldn’t help but smell the faint scent of flowers in her hair.
Moments ticked by where all we could hear was the lapping of waves against the
shore. It took her some time to answer me, and as I waited, the sun slowly
began to sink into the sky.

“I’m not sure. I’m out there on a boat in the sea. I’m in a
room by myself waiting. I’m bound with leather cuffs, designed to keep my skin
free from marks.”

She was baring her pain to me, and all I could think to do was
remind her she was free. Remind her we were almost home and almost safe. We
would make it.

“You’re here with me. You’re not back there. You’re free,
Alejandra. They’ll never touch you again.

Abby McCarthy is reader and a lover of words. She is a blogger
turned author and released her first novel in May 2014. She is a mother of
three, a wife and a dog person. She has always written, sometimes poetry,
sometimes just to vent about failed relationships, however in parenthood she
has found her voice to help keep her sanity. Words have flowed from her, to
review and with the support of amazing friends in the Indie community she has
decided to pursue her dream of writing! She loves to write and read romance
because isn’t that something we all yearn for? Whether it be flowers and hand
holding or just the right tug on your hair. Isn’t that what life is about? The
human connection?