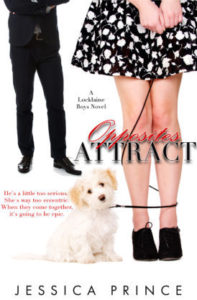 byJessica Prince
Delilah Northcutt has been described as weird, nerdy. But her favorite term is quirky. The eccentric flower shop owner definitely marches to the beat of her own drum. On the rebound from a cheating ex, she’s not looking to open her heart to someone else any time soon. On a whim, her best friend convinces her that one night with a stranger she’ll never see again is just what she needs to pull herself out of the funk she’s been living in.

Overly serious, workaholic Richard Locklaine was always described as the twin determined to do the right thing. Even if it was at the cost of his own well-being. But after years in a loveless, manipulative marriage, he’s finally free and ready to build a life of his choosing. And nowhere in that life is there room for another woman—unless it’s for just one night, of course.

They are complete opposites in every single way. But for some reason, fate has decided to force the two of them together. Despite the chemistry, they’re determined to fight the attraction growing between them. Besides, what could a florist with horrible taste in music and an attorney from Connecticut ever really have in common? Only one thing is certain. When they finally come together, it’s going to be epic.

***This is Book 2 in the Locklaine Boys series, a spin-off of Love Hate relationship. They are interconnected standalones.***

NOW AVAILABLE ON AMAZON: http://amzn.to/2b0ywnU
EXCLUSIVE INTERVIEW WITH JESSICA PRINCE
Jessica – thank you so much for taking time to hang out with us Blushing Babes…as you can see from Jade’s review, she absolutely LOVED Opposites Attract but we want to get to know YOU now!

BBAUN: Where were you when you thought, “Hey, I think Ill write a book!”?
JP: You’re actually asking a woman with “mom-brain” if she remembers where she was over three years ago when she decided to write a book? LOL, hell if I remember.
BBAUN: When and why did you start writing novels?
JP: Well, I’ve always written, ever since I was little. I had one book (that sucked something major) that I actually queried to tons of agencies and publishing houses, but then Picking up the Pieces came to me during that god awful process just as self-publishing became a thing, so I just decided to write it and go that route instead. (Oh, and I tossed the other book out. LOL)
BBAUN: Do you name your characters after people or do names just POP into your head?
JP: Typically I use names that I had considered if I ever had a shit load of kids (Disclaimer: I only have one kid).
BBAUN: Are your characters/stories inspired by events and people in your life?
JP: No. Strictly fiction. I might put scenes in that I lived through, and some of the characters have personality traits similar to me and close family and friends, but that’s the extent of it.
BBAUN: Who’s your favorite character that you have written, so far, and why?
JP: There’s no way I could pick a favorite. But I WILL say I’m extremely excited to start Devon’s book because right now I’m loving her.
BBAUN: Does music inspire you?  And what are you listening to right now?
JP: I’m one of the weird few who can NOT write with music. I can write in my living room, with the TV blaring and my kid going absolutely nuts, but if theirs music playing I lose all focus.
LIGHTNING ROUND
Which do you prefer…
Boxers or Briefs – Combo of the two, boxer briefs
Blue Collar or White Collar – blue collar. I love them rough and manly
Toys or No Toys – Toys, spice that shit up
Sweet or Salty – a little of both
Paperbacks or Kindle – I’ll buy paperbacks, but I mainly READ on Kindle
Flats or Heels – flats. I’ve done heels plenty and normally end up wanting to cut my feet off
Length or Girth – girth, because who wants a pencil d**k?
Facebook or Instagram – Facebook
Water or Beer – Beer
Mans hair- Long or Short – depends on the dude
Straw or No Straw – Depends on the drink
Food Shopping- HOORAY or UGH – I’ve been banned from the grocery store by my hubby so I’ll go with UGH
Night Out or Chinese in bed – Chinese in bed – over the covers cuz that shit’s messy
Beach or Pool – pool. Sand is the effing devil (but I love the lake)
When you Drive- Windows open or AC – AC. I’m from Texas. It’s hotter than the Devil’s butthole here.
Early bird or Night owl – Depends on my writing deadline 😉

JADES 4.25 out of 5 Insanely Sexy Blushes!
Opposites Attract is, probably, my favorite Jessica Prince book and I’m pretty sure it’s about to be yours as well!  She really went above and beyond in her genre with this little gem!
Richard and Delilah have a STEAMY, and I mean STEAMY one night stand and never think they will see each other again.  Little do they know that the joke’s on them and they collide, sending fireworks everywhere!!  They are hot and cold and then, SUPER HOT!  Opposites Attract is sexy, sultry & sweet!!!  Absolutely a fantastic read!
What’s even better about this book is Devon, Delilah’s roommate and best friend.  She almost steals the show with her funky, foul mouth and witty antics.  Devon is my kind of girl and I fell in LOVE with her!  She’s a ball of fun and really makes this story and her role stand out tremendously!
I’m super curious as to where she goes with this series because I WANT MORE!  Jessica truly did a fantastic job with Opposites Attract and all of her characters.  Her storyline is on point as well as her writing.  Pick this up quick!  You’ll love it too!
Share