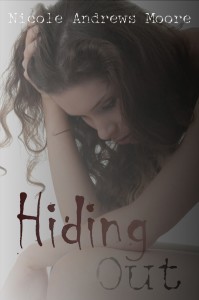 We are excited to bring you an excerpt of Sam & Haley from Nicole Andrews Moore’s recent release – HIDING OUT!!

Samuel Davenport runs his family’s New York based advertising agency. His brother, Adam, runs from responsibility and anything remotely boring. And his temp, Haley, runs so she’ll never be caught and hurt again. She moved to the city New Year’s Day to hide and recover, to build a new life far from her past. In an effort to lie low, Haley never expects to be more than a temp. What begins for Sam as an excuse to get to know her better, ends up being an opportunity for advancement and excitement for Haley. When Sam tries to uncover all of Haley’s mysteries, he exposes her hiding place, endangers her life, and threatens to destroy any chance of them ever having a future together.

They were the only two left in the building, since most everyone took lunch from one to two every afternoon, returning only reluctantly.  Haley swallowed and took a deep breath to steady herself.  She hadn’t always been like this.  She used to be fearless.  Unfortunately, she discovered too late that a little fear is often a good thing.  Slowly, she opened the door.  Samuel Davenport was not wearing a shirt.  She swallowed hard and tried to hide the panic that was stirring within her.  Impatiently, he waved her closer.

He looked at her with an expression of annoyance.  “Well, I do mind.  Get over here.”

Glancing behind her once more and mentally calculating the distance to the door, Haley reluctantly met him on the opposite side of the desk.  “Yes, Mr. Davenport?”  She focused her attention downward, determined not to stare at the sharp muscle definition in his chest, or the way he had only the sparsest amount of hair that culminated at his belly button and trailed well below her line of sight.

He shook his head in annoyance.  Never before had a woman responded to his body with so little interest.  “Could you run this shirt to the cleaners?  And then I’ll need a fresh one.  What’s closest?”  She stared at him blankly, clearly unfamiliar with the geography of the city.  He all but growled in frustration.  Scribbling some directions on a scrap of paper, and including his shirt size requirements, he handed her a credit card from his wallet and sent her out the door.  “Hurry please.  I can’t work like this.”  He gestured to mean shirtless and exposed.

Biting her lip, Haley exited the room.  She was about to shut the door when a thought occurred to her.  “What color would you like?”

Samuel was frozen for a moment, caught up in the curve of her lips, the way her neck looked with her head tilted at that angle, exposing that utterly kissable hollow near her collar bone.  He shook his head, clearing away the distractions, and sighed.  Tossing her the tie, he said, “Surprise me.”

Nicki has lived in Charlotte, North Carolina with her children for the past eleven years and her husband for the past three years.  Her journey has barely begun and she loves every minute of it.  Every day of her life seems to bring new adventures, some bigger, better, shinier and prettier than others.  She’s still getting used to that new life smell she’s experiencing, a combination of hope, love, and happiness.  (The perfect scents to build a new life on…)

For fun, she spends time with those she cares about, cooks, reads, writes, and especially lives to travel.  The current travel goal: visit every Margaritaville.  Two down!  (Eleven to go?)

In addition to writing on Suddenly Single Journey, Nicki is a contributor for Project Underblog.  Her writing can also be found on Shine, where she is a Shine Parenting Guru and an award winning Yahoo! Contributor on YourWisdom as the relationship and dating expert.  And she has been published by McClatchy News in their syndicated papers.