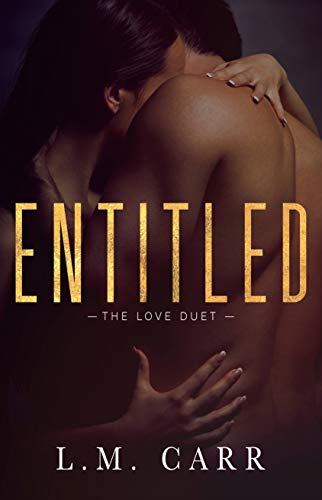 As far back as sexy, blue-eyed Andrew Darling can remember, money provided everything he wanted. Expensive cars, prestigious schools and exotic vacations. But his life of luxury comes to a crashing halt with a single phone call.

Forced to work at his parents’ advertising agency, Andrew reconnects with Morgan Montgomery, a newly divorced woman whose spirited personality and hard work have earned her the respect of her employers and colleagues.

With constant reminders of walking away from Morgan, Andrew learns the difference between wants and needs because although he wants Morgan in his bed, he realizes he needs her.

Only Morgan Montgomery can give him the one thing he’s never been entitled to.

I have read several of L.M. Carr’s books and really have enjoyed them. Entitled started out rough for me. Honestly I had a hard time with Andrew Darling’s character. I found him to be an arrogant jerk. And, as the title basically states, he really thought everything was owed to him. However, the more I read, the more I was able to see the character redeem himself.

Morgan and Andrew have an unlikely friendship. Both have had their fair share of heartbreak and trust issues. Once I really got to know Andrew’s character, I couldn’t help but feel sorry for him. He’s a grown man but struggles with constantly looking for love from the ones who should have loved him all along. The author really dug deep into some emotional issues. She really captured my attention with her words and details throughout the entire story. She did a fabulous job at setting up each scene and making it feel as though I was watching the story unfold before my eyes. There was also some angst that made me want to throw my kindle because I was so frustrated with Andrew’s behavior. Despite that, the chemistry between Morgan and Andrew was undeniable and off the charts. I enjoyed their bickering as it added a touch of humor at the right moments.
This is a duet, so of course, once it was getting really good, I was left with a cliffhanger. I can’t wait to see where L.M. Carr takes Andrew and Morgan in the next book.
Amazon: https://amzn.to/2IhPAaW
Share