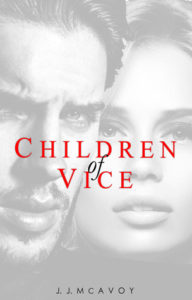 I, Ethan Antonio Giovanni Callahan, first son of the former head of the Irish mob, Liam Alec Callahan, and former head of the Italian mafia, ex-governor, Melody Nicci Giovanni Callahan, solemnly swear to ruthlessly protect our family name, business and way of life, no matter the cost to me or anyone else. I shall show no mercy; I shall offer no forgiveness; there will be no peace for those who stand against me.

I, Ivy O’Davoren, the only daughter of Shay O’Davoren, solemnly swear to ruthlessly and mercilessly exact revenge on the Callahans and all those who betrayed my father and family.

This young man has taken his god given right as the Ceann naConairte, after the death of his father, by the balls and has twisted…HARD! He has taken this job and responsibility to heart. He continues to show that

Ethan didn’t wait to show his muscles. He began his wrath of ruthlessness as early as 11 years old. He takes no shit from anyone, not even his grandmother is immune to his tyranny.

Ethan has the master plan. He is controls everything and everyone. He has his sights set on Ivy, the cousin to the Boston Finnegan’s who are causing him problems. So at all costs, Ethan will win. Even if he has to bring Ivy into his life. (Which may be the best decision he has ever made).

JJ McAvoy has once again enthralled me from page one. How she has woven these characters into adults so seamlessly, she amazes me. She has given us Ivy and Ethan who are ruthless and a “sent from God” couple. (and when they are together, watch out!) They are each other’s perfect match. They are strong, determined and vengeful! ← put those together and you are guaranteed a great novel by JJ McAvoy.

I believe that Mel is smiling down at Ethan, seeing the woman he has chosen to stand by his side. She’s such a badass – just like Mel was. I know that Liam is watching his son rule the Callahan Empire as well, if not better than he did.

We see Dona and Wyatt too and they are always up for a good battle. They have all grown and are willing to do whatever needs be done to keep the family in power.

JJ McAvoy once again has written a story in multiple POV’s which is my favorite way to read a book. She has woven these characters from 5 other books and seamlessly added them into the Callahan/Giovanni clan.

I shall sit here, trying to figure out where JJ McAvoy is going to take us next in Dona’s story! I wouldn’t dare try and figure out what she’s thinking but I CAN NOT WAIT!

JJ McAvoy I continue to bow down to your genius ways and your story telling abilities forever surprise and delight me!

Children of Vice is Amazing!!! This book will have you talking with everyone.  JJ McAvoy continues to write and create exceptional character and plots that blow your mind. Her mind is a scary place.

Ethan Callahan becomes the head of the Callahan a Empire after he’s father passing. He was born for this. He’s the most feared man. This man has shown how ruthless he could be at a young age. He will never bow down and he won’t take shit from anyone… not even la familia.

Ethan needs to control everything and everyone. He has set his eyes on Ivy O’Davoren, who is the cousin of a Boston ally, but is causing trouble for Ethan. Bringing in Ivy will set a course of action that no one expects.  Even Ethan has no control over it.

Mel and Ethan have raised their children right, they would be so proud of the adults they have become. Ethan has taken the Callahan Empire to a whole new level. We see Wyatt and Donatello they both have their own issues, but when it comes to familia they are true Callahan’s.

JJ McAvoy keeps surprising us with this series. It’s done in multiple POVs, which she loves to write in, if you haven’t noticed. She has created Ethan and Ivy’s characters and they will meet every expectation you have throughout it.  They both show you their power and will to hold up the familia. I thought Mel and Liam were ruthless?!  I think Ethan and Ivy are so much more!  This couple is going to do great things for the Callahan Empire.  Mel and Liam would be proud!

This gang is vindictive, calculating, and beyond dangerous!  Their parents raised them right. JJ McAvoy has written the struggles of the siblings throughout this series and she didn’t sugar coat anything. If you’re a huge Mafia Fan and haven’t read this series you are missing out. Ruthless People set the bar high. McAvoy holds nothing back in her storytelling and has made it authentic. Children of Vice has really stuck with me. You won’t be disappointed. This is a new story, with a new plot!  She is amazing at creating these characters and storylines!  Her mind has me a bit scared with her storylines, but I love every minute of it!  Children of Vice was absolutely amazing!