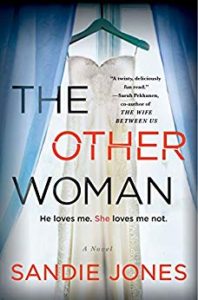 The most twisty, addictive and gripping debut thriller you’ll read this year.

BUT SHE LOVES YOU NOT: Lurking in the shadows is a rival, a woman who shares a deep bond with the man she loves.

AND SHE’LL STOP AT NOTHING: Emily chose Adam, but she didn’t choose his mother Pammie. There’s nothing a mother wouldn’t do for her son, and now Emily is about to find out just how far Pammie will go to get what she wants: Emily gone forever.

THE OTHER WOMAN will have you questioning her on every page, in Sandie Jones’ chilling psychological thriller about a man, his new girlfriend, and the mother who will not let him go.

From the moment I read the title of Sandie Jones’ debut novel,The Other Woman, I was instantly intrigued.  I like to go into books blindly, but I skimmed the synopsis and couldn’t WAIT to get my hands on this! The Other Woman was everything I could have hoped for… AND SO MUCH MORE!
This is story of a classic “Monster-In-Law”.  Pammie is calculating and manipulative and she’s an absolute nightmare to Emily, who is dating her prize son Adam.  This woman pulls every trick in the book to ruin their relationship.  She’s on a mission and this is a woman that gets everything she wants. But Emily refuses to go down in flames, and Pammie quickly realizes that she just might have met her match.  The heinous acts that Adam’s mother commits would have me running for the hills.
The Other Woman is extremely well written.  This was a very exciting read full of shock and dismay!  Kudos to Sadie on her first release!  She is, without a doubt, a new author to follow!
Share