Current on sale and audio release!

Current is on sale for 3 days only! This book is rarely on sale and has only been on sale for  99 cents once before. Abby McCarthy is putting it on sale for Four days only to celebrate the release of my audio Current! Current is narrated by the very talented Maren McGuire and is available on whyspersync for a reduced price when you own the e-book. 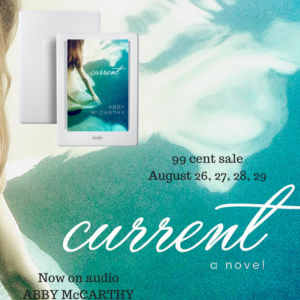 June would have done anything for Jake. The two were inseparable. He was going to run away to be with her. Then, his abusive father destroyed their happiness.

Years later, June sits down to write a review for the band Silent Tides and is floored when she comes face to face with Lucas the keyboardist. Lucas looks so familiar; the resemblance to Jake is uncanny.

June falls fast and hard for Lucas, but she continuously questions her feelings for him, unsure if they are because he reminds her of Jake or because of who he is.

Just when June thinks she’s found happiness with Lucas, she loses him too. Their new love is torn apart, clouded in a veil of deceit and lies, shattering June.

Six years pass and June feels like she finally has found peace in her life. Once again, it’s ripped wide open when she comes face to face with a love from her past.

Now it’s June who has a secret.

Listen to original music from Toast and Coffee