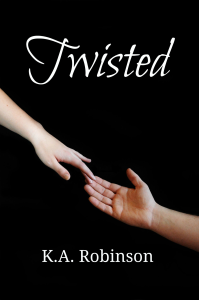 Chloe and Drake have found their happily ever after… Almost.

When Chloe’s mother comes back into her life with a bang, it sets off a chain of events no one could have ever expected.
Everyone has their demons, and Chloe and Drake’s hit them with a vengence.

Sex, drugs, money, a crazy ex, and Rock n Roll…. Can they survive it all?

Things are beginning to feel a bit… Twisted.

Danny seemed like a cool guy, but Jordan was another story. I caught him staring at Chloe several times in a way that made my temper boil. This guy was definitely an issue I intended to address with Chloe when we were alone. It was like watching Logan chase after her all over again.

When we finished dinner, I grabbed Chloe’s bags I had set by the door as they led us up one of the staircases and showed us to our rooms. Danny asked if we wanted two separate rooms and I smirked at Jordan.

“No thanks, I’ll keep her in my bed like I always do.”

His nostrils flared, but he remained silent.

Take that fucker, I thought to myself.

Danny seemed unaware of the staring competition going on between Jordan and I as he continued. “Fair enough, you guys can have this room here. If you need anything, just let me know. Chloe knows where my room is.”