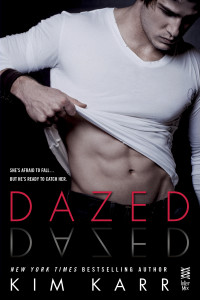 Jagger Kennedy never went looking for fame, he just fell into it. After scoring a major modeling contract, his clean-cut good looks and charm catapulted his career. But when his actress girlfriend breaks his heart, he moves to L.A. to try his hand at acting. He’s not looking for love—he just needs to make a change.

Aerie Daniels is a woman in control … until she meets Jagger. Her surprising connection with him leaves her dazed and it’s unlike anything she’s ever felt. But just when she lets her walls fall, she makes a startling discovery about Jagger that breaks her fragile heart into a million pieces.

To keep from losing the woman who’s changing his world, Jagger is willing to give up anything—including his career. But even that might not be enough to regain Aerie’s shattered trust…

© 2014 by Kim Karr
Published by the Penguin Group

There’s something deliciously perverse about staring through the clear glass. All of my senses engage as I wait in line—the fragrance that fills the air as the fire crackles beneath the foil wrapped treats wafts under my nose, the beauty in each and every small package as they line the shelves with tiny dots and colored sprinkles mesmerizes me, the sound made as the silver sheet is peeled back to reveal the magnificence it holds captivates me, and the anticipation of the taste makes my mouth water. Ummm… just thinking of the first bite into the moist brown exterior with its bittersweet Belgian chocolate complimenting the flavor of the Madagascar bourbon vanilla that oozes from its inside has me trembling. The black and white cupcake—it’s simply perfection.

Amidst the skyscrapers in Los Angeles’ South Park neighborhood, Sprinkles is a gem tucked away for those of us who seek out a small piece of heaven. I don’t come here often, but when I do it’s for that one special treat. The menu describes it as, “Yin and Yang.” An ancient proverb that says, “Complementary opposites, such as light and dark, day and night, and masculine and feminine, seemingly may exist as contrary forces, but are actually interconnected.” Simply put, it says one gives rise to the other and it’s true—
opposites attract. Without the vanilla inside, one could not possibly crave the chocolate outside—looking at the two parts united has me drooling.

“You know what they say about staring through the glass,” a deep husky voice says from behind me.

His words tingle my skin and my gaze snaps up. “Excuse me?” I stop short, in a daze, not even sure what he just said I was so lost in my thoughts.

He chuckles. “You know what they say about staring through the glass,” he repeats.

My eyes blink and come into focus on the upward tilt of his full lips. Then my eyes move to his smooth pale skin flecked with a light stubble, his nose seemingly sculpted even with a slight imperfection in its slope, large eyes with the most unusual gray color swirling from within, and chocolate brown colored hair framing his face in pieces—I’m not sure if he has just rolled out of bed or if product molds it just so. Either way, he is utterly beautiful.

“I’m sorry, I don’t know what you’re talking about.”

“Just be careful so you don’t fall in like Alice.” He smiles, displaying his bright white teeth.

“Again, I’m sorry but I have no idea what you’re talking about.” I notice his eyes sweep over me and my heart starts pounding.

“Through the Looking Glass,” he responds in a dangerously husky voice.

This time when he speaks I catch an accent, ever so slight but extremely sexy.

It reminds me of how Robert De Nero talks, just not as loud or fast. I continue to stare, unable to respond. I notice that his physique is long and lean. He’s dressed in worn jeans that fit him perfectly. His orange laced hiking boots scream I don’t conform. A pair of tortoiseshell sunglasses hang from the V of his gray sweater, which clings to his body perfectly. And an outdoor vest tops the outfit. It throws me off. It makes him look more like an Abercrombie model than a James Dean type. It’s a navy blue down and quilted one with a silver zipper. I don’t know why, but something about his outfit, about this man, captivates me.

“Number 98,” calls the girl from behind the counter.

He steps closer. His warm breath whispers across my neck. “Through the Looking Glass is the sequel to Alice in Wonderland. When Alice gets too close to the glass, she falls in and starts on a crazy journey,” he tells me as his arm waves in the air with a green ticket on display. Stepping closer, his gaze cuts from mine to the glass case as he hands his number to the clerk whose wearing a cute brown apron with the word Sprinkles scripted across it.

“Can I have a dozen of the black and white cupcakes?” he asks.

Suddenly alarmed, my eyes dart to the case as I watch the single remaining row of beautifully crafted cupcakes diminish until there are none left. My irritation flares as I glance at my glance at my number—97.

The beautiful stranger hands the clerk his credit card and waits to sign the slip.

“Oh, I’m sorry. Here let me get the sales clerk’s attention so you don’t have to take another number,” he says.

“Miss,” he calls draping his perfectly fit body over the case. She looks his way and with a charming grin he says, “Can you help this lovely lady? She missed her number being called.”

“Of course, I’m so sorry. How can I help you?” the girl asks averting her eyes from the man who looks like he should be on the cover of GQ magazine, over to me.

He smiles at me with a face that belongs on a billboard. “Don’t fall in.”

I swear he’s goading me. But then he tips his chin and a sexy, smoldering grin passes over his lips and I’m not so sure anymore. He turns to look at me one more time before he exits, and excitement flushes over my face. I nod a slight cursory acknowledgement, then he disappears and disappointment washes over me—he’s gone. Crap. The cupcakes are also gone. Double crap. And now I’m left wondering if he saw me staring at that flavor? Did he distract me on purpose so he could purchase them first? Urrr…I’m so angry right now I consider walking out, but when the clerk asks me what I’d like I settle for the Vanilla Milk Chocolate cakes—they are the mirror reflection of the black and whites, with vanilla cake and chocolate frosting, but they are not nearly as good.