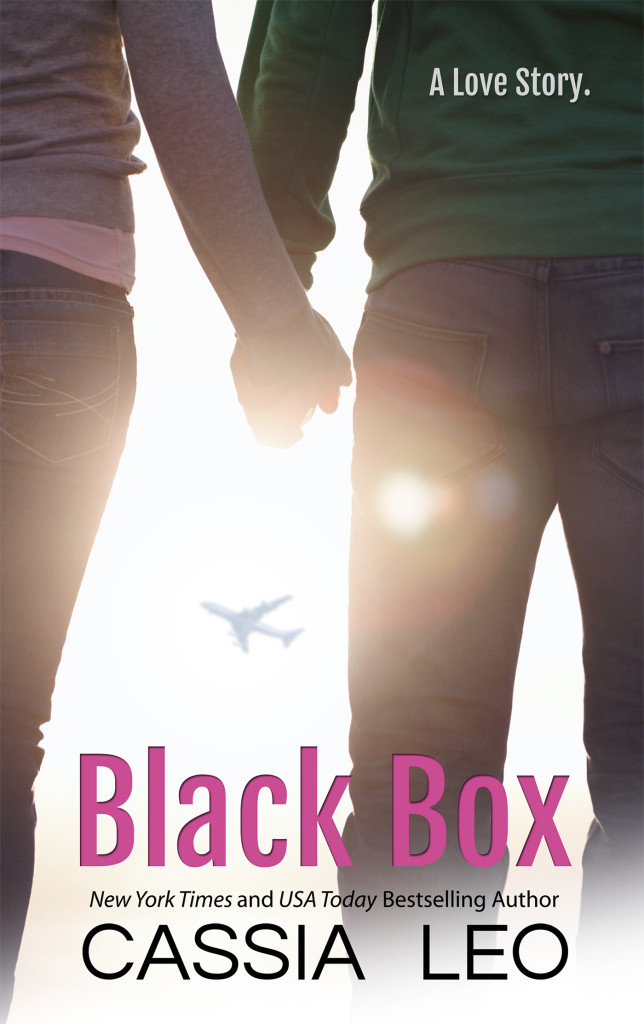 A standalone novel about a girl, a boy, and fate.

Over the course of five years, Mikki and Crush cross paths on two separate occasions. Their first encounter changes Mikki’s life forever, but their second meeting leaves them both buried beneath the emotional wreckage of a violent attack. Mikki is left with more questions and grief than she can handle, while Crush is forced to forget the girl who saved his life.

Now nineteen years old, Mikki Gladstone has decided she’s tired of the mind-numbing meds. She books a flight to Los Angeles to end her life far away from her loving, though often distant, family.

Twenty-one-year-old Crush has always channeled his blackest thoughts into his music, but he’s never had great aspirations. He decides to fly to Los Angeles to record a demo of the only song he’s never performed in public; a song he wrote for a girl he doesn’t even know: Black Box. He has no expectations of fame and he’s never felt like his life had any purpose… until he meets Mikki in Terminal B.

When Mikki and Crush cross paths for the third time in Terminal B, neither has any idea who the other person is; until they slowly piece together their history and realize that fate has more in store for them than just another love story

The moment you realize you’re going to die is nothing like I imagined it would be. I imagined a deep internal struggle coupled with a visceral physical response—fight or flight. But there’s no fighting this. I’m going to die.

It’s possible that everyone on this plane is going to die. I wonder if they feel this overwhelming sense of peace, or if the squeal of the plane engine has drowned out all their thoughts.

He grabs the oxygen mask as it drops from the compartment and he’s yelling something as he puts the elastic band over my head. He pulls his own mask over his head then he grabs my hand and looks me in the eye. There’s no panic in his eyes. Maybe he feels this same calm I’m feeling. Or maybe he just wants me to know that he loves me. Or, more importantly, that he trusts that whatever happens to us in the next few seconds was meant to be.

I used to think fate was for religious nuts and people who were too afraid to take their fate into their own hands. Now I know the truth.

Please don’t look for me. You probably won’t find me. This shouldn’t come as a surprise to anyone, and please don’t blame yourselves. I’m just tired. Trying to cope…. trying to forget…. It’s not enough anymore. I just want to close my eyes and know that it will all be over soon. There’s nothing anyone could have done. You’ve all done more than enough. I hope you all find peace knowing I am no longer suffering. I love you guys. Tell Meaghan I leave her my black box.

I tuck the note inside a plastic baggie and seal it tightly, then I lift my bedroom window an inch and lay the bagged note on the window sill. I shut the window tight to trap the note there.

Taking one last look around the bedroom, I smile as I think of how much I won’t miss this house. The pink tulip-shaped knit cap my best friend Rina bought for me in Holland sits on top of my dresser. I’ve only worn it once, the day she brought it back for me from her family vacation last summer. I was in High Point Treatment Center at the time, in the dual diagnosis unit because I’m one of the special cases that needed both treatment for attempted suicide and drug detox.

“You look awfully cheerful for someone who’s traveling alone.” Meaghan’s green eyes follow my suitcase as I drag it down the stairs, then her gaze shifts to my face. My sister is seventeen, but she’s not stupid. She knows the signs, which is why I’m trying my hardest not to exhibit the typical suicidal behavior.

I didn’t give away all my belongings. I’m not traveling light. I have tried not to appear too chipper over the last couple of days. Yes, it feels amazing to have a plan. It feels like a ten-ton slab of cement has been lifted off my chest. I can breathe. I can think about the future without the crippling anxiety and depression that comes with not knowing if the pain will ever end.

But I can’t let Meaghan or my parents see how ridiculously relieved I’m feeling. They’ve seen that behavior too many times. The last time I made plans to die, three months ago, my mom saw the signs and followed me to the hotel room where I was going to hang myself. The time before that, I swallowed a bottle of pills in my uncle’s bathroom. It was my cousin Gertie who noticed I was acting too happy. She told my Uncle Cort, “Mikki is smiling again.” Uncle Cort broke the door down and that’s when I ended up in High Point. That’s also when I swore I wouldn’t commit suicide anywhere that someone could find me.

“Cheerful?” I repeat Meaghan’s adjective as I pull up the telescoping handle on the suitcase and roll it across the tiled foyer toward the front door. “More like nervous as fuck. I’ve never flown without Mom.”

Meaghan yanks her green parka out of the coat closet and pulls it on over her hoodie. “I’ll take that,” she says as she pulls the hood of the parka over her long, brown hair and grabs my carryon bag.

I open the door and we both suck in a sharp breath when we’re blasted with a flurry of freezing winter air. The snow sticks to my face and I quickly close the front door so it doesn’t get in the house.

“Jesus fucking Christ. It’s colder than a witch’s tit out here. They’re going to cancel the flights if this shit keeps up,” Meaghan says as we carefully descend the front steps. My dad covered the steps in his special mixture of salt and sand, but it’s not foolproof.

“If they cancel the flights, I’ll come back, but they’ll have to reschedule the flight. I can’t just not show up. I saved up three months paychecks for this fucking ticket.”

Meaghan opens the wooden front gate and the cabbie scurries out of the car to help us with the bags. As he stuffs the bags in the trunk, I turn to Meaghan and she’s crying. Something tells me she knows, but she would stop me if she knew—wouldn’t she?

“Why are you crying? It’s just a job interview. I’m coming back in four days.”

“I know,” she whispers before she wraps her arms around my waist. “But I’ll miss you. Bring me back a hot actor.”

We hug like this for far longer than normal. It takes every bit of self-control in me not to tell her that everything will finally be okay when I’m gone.

She finally pulls away and punches my arm. “Get the hell out of here.”

“I love you, too,” I say as I slide into the backseat of the cab and my heart stutters as I look at the house I grew up in for the last time.

The driver slams my door shut and gets into the driver’s seat. “Logan?” he asks as he turns up the heater.

“Yeah, Terminal B,” I reply as I watch Meaghan scurry into the house to escape the cold.

I reach into my handbag and pull out my gloves, then I see the bottle of pills. I lay the black gloves on my lap and reach into my purse for the bottle. On the outside, this is just a normal bottle of anti-psychotic meds. On the inside, this is my self-prescribed emergency meth stash. Each capsule is carefully filled with one dose.

I quit meth last week. Something about booking a plane ticket to Los Angeles to end my life gave me the fortitude to face the world without drugs. Besides, I was never really addicted. I just didn’t want to quit because it made me feel as if I was in control. But, even though I’m technically no longer a meth-head, I brought my emergency stash in case I lose my nerve.

I’m going to Los Angeles, specifically to the Pacific Ocean, to swim out into the open ocean until I can’t swim anymore. The water is so cold this time of year, my body will be numb and exhausted by the time I reach the point of no return. I won’t be able to fight it when the water enters my lungs. Plus, I’ll be so far out in the ocean, the odds of my body being found will be slim. My parents won’t have to identify me.

The cabbie turns the volume up on the radio and Take You Higher is playing on the radio. The dance beat buoys my mood and I allow myself to smile for the first time in days. I set the bottle of pills back inside my purse and pull my gloves on as I sit back.

Fifty minutes later, the cab pulls up in front of Terminal B and one of the two guys working at curbside check-in rushes over to help me with my suitcase once the cab driver places it on the curb. I pay the driver and he mutters a quick thank you before he hurries back inside the warm cab.

“Holy shit,” I whisper as I pull my faux fur-lined hood over my head.

“I ain’t seen it like this in years. I bet they already canceling flights,” the guy says as he takes my carryon bag and we race toward the automatic sliding doors. He leaves me and my bags just inside the doors then he jogs back to his station outside in the freezing cold. What a terrible day to have that job.

I push my hood back and the line at the check-in counter snakes across the floor as everyone watches the TV monitors above the counter.

“Cancelled,” a voice says behind me.

I whip my head around and find a guy with dark eyes and messy brown hair sticking out the bottom of his knit cap. He’s sitting on a gray suitcase with his phone in his hand and a guitar case propped up against the wall behind him. Something about him looks familiar, though I’m pretty certain he’s the kind of guy I would not forget if we’d met before.

“You can probably still catch a cab if you leave now,” he continues as he types on his phone.

“Then why aren’t you running outside to catch a cab?”

I stare at the curb outside just as another cab pulls up to drop off some unknowing passenger. I told Meaghan I’d go home if they cancelled the flight, but that’s the last place I want to go right now.

The guy looks up from his phone and smiles. “Yeah, you also have to check in to get your flight rescheduled.”

“Yeah, that too.” I try not to blush. Something about his smile makes me feel naked.

New York Times bestselling author Cassia Leo loves her coffee, chocolate, and margaritas with salt. When she’s not writing, she spends way too much time watching old reruns of Friends and Sex and the City. When she’s not watching reruns, she’s usually enjoying the California sunshine or reading–sometimes both.